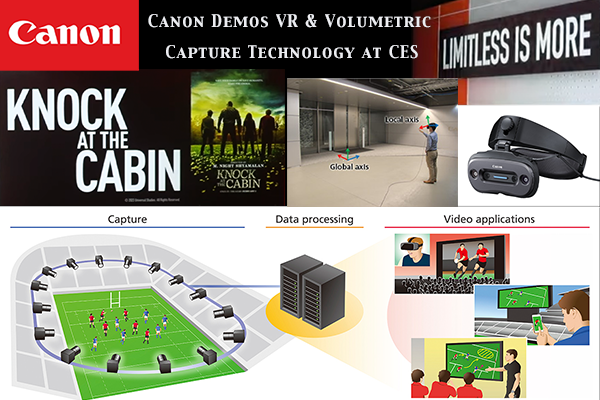 With the theme “Limitless is More”, Canon put many of their latest technology innovations to work to create live demos at CES 2023 including Free Viewpoint video system, MReal mixed reality headset, Kokomo VR software and remote collaboration tool AMLOS. The Free Viewpoint system captures volumetric camera data with hundreds of cameras to create a 3D model that can be used to reproduce various viewing perspectives in near realtime. One application that was demonstrated allows the streaming sports viewer to choose and control their perspective as opposed to a traditional TV broadcast where the director is calling the shots.  Such a system has already been installed at two NBA arenas for the Cavaliers in Cleveland and the Nets in Brooklyn, and we are told the latency is low enough to be streamed live, (although there must be some delay to feed all that camera data to the cloud, process the 3D volume, and stream back to viewers.)

Another demo in collaboration with M. Night Shyamalan uses Canon’s MReal Mixed Reality Headsets to show a short VR experience from four different character perspectives based on his upcoming feature release of Knock at the Cabin. Canon’s Kokomo technology enabled 3D video calls with VR headsets and Canon’s AMLOS was demoed for use as a collaboration tool in making these experiences as well as for various educational applications.