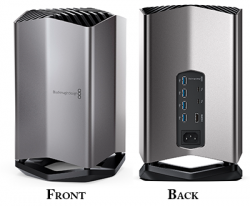 To coincide with Apple starting to ship their new 2018 refresh of the 13-inch and 15-inch MacBook Pro, Blackmagic has announced the Blackmagic eGPU, a high performance graphics processor for pro creative software users.  Designed in collaboration with Apple, the Blackmagic eGPU features a built-in Radeon Pro 580, two Thunderbolt 3 ports, HDMI 2.0, 85W of charging power and four USB 3.1 connections. It will allow high-end desktop class graphics processing on the MacBook Pro for professional video workflows such as DaVinci Resolve, 3D games and VR.  The Blackmagic eGPU is the first to support Thunderbolt 3 displays. 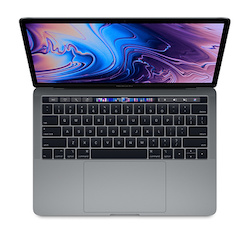 The new MacBook Pros are not major redesigns, but offer configurations with 8th-generation Intel processors and more cores than before—a maximum of six cores on the 15-inch model (compared to four in last year’s models) and four in the 13-inch model (compared to two).  The six-core Intel Core i9 CPU is clocked at 2.9GHz.  Six-core Intel Core i7 processors are also options. The faster memory uses more energy, so a bigger battery is now included, but only to keep battery life about the same as last year’s.

The new MacBook Pros don’t come cheap, ranging in price from $1,299US to $2,700US, depending on configuration.  The Blackmagic eGPU is available now for $699US exclusively on Apple.com and in select Apple Retail stores worldwide.