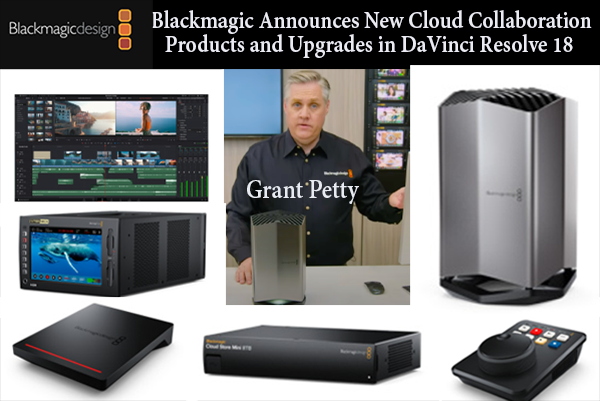 In the run up to NAB, Blackmagic’s Grant Petty held an online briefing detailing several new products and updates to DaVinci.  Known as Blackmagic Cloud, the combined hardware/software system is designed for editors, VFX artists and others to collaborate via the cloud in realtime.  Chief among the new products is Blackmagic Cloud Store, a new network storage solution with four 10G Ethernet connections and a parallel memory core said to simultaneously sustain maximum possible transfer speeds on each 10G Ethernet port.  At an MSRP of $9,595, it is a somewhat pricey item for Blackmagic, but it is designed for facilities and the cost is largely a factor of the very robust flash memory included.  However, to serve the smaller and individual user, they have also introduced the Blackmagic Cloud Store Mini at $2,995, and the Blackmagic Cloud Pod at only $395.  Petty makes the point that their approach does not require an ongoing subscription.  After you buy the hardware, you would only pay your cloud storage provider.  He used Dropbox sync in the demo for users to cache files locally and share them with everyone in their network.

Other new products include HyperDeck Shuttle HD, a new recorder/player designed for use on the desktop as an on demand media player. It supports recording and playback for ProRes, DNx and H.264 files as well as PCM or AAC audio. It also has a built in teleprompter function which could prove very handy.  An Extreme version of HyperDeck includes 4K HDR as well as advanced H.265 4K recording with a touch screen user interface with built in scopes and HDR screen.

If all that wasn’t not enough, DaVinci Resolve 18 has also been announced with a host of new updates in the areas of cloud support for remote collaboration, proxy workflows, AI based Resolve FX, improved subtitling, and Fairlight audio.