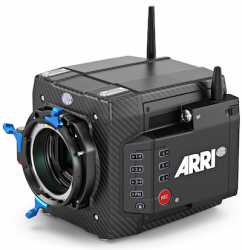 While ALEXA Mini LF is compatible with almost all ALEXA Mini accessories, it brings significant enhancements to the Mini camera design. Among them are extra connectors, including regulated 12 V and 24 V accessory power; a new 6-pin audio connector; built-in microphones; and improved WiFi. The ALEXA Mini LF allows internal recording of MXF/ARRIRAW or MXF/Apple ProRes in a variety of formats and aspect ratios, and is the first camera to feature the new Compact Drive recording media from Codex. Lightweight, but solidly built, the 1 TB drive can also be more affordable as it comes with a USB-C Compact Drive Reader that can be used without any extra software or licenses on Mac or Windows computers. In addition, a Compact Drive Adapter can be used in any dock that accepts SXR Capture Drives, potentially more than doubling download speeds.  Codex has also developed High Density Encoding (HDE) for loss-less encoding to reduce ARRIRAW file sizes by around 40% during downloading or later in the workflow.  HDE is free-of-charge for use with Codex Capture or Compact Drives, openly shared, and fast.  The ALEXA Mini LF cameras are scheduled to start shipping from mid-2019, prices TBD.  For more information visit: www.arri.com/alexaminilf