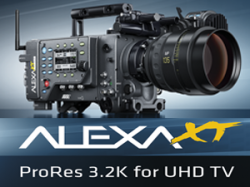 ARRI has announced that it will include ProRes 3.2K in an Alexa software update scheduled for release early next year.   ProRes 3.2K – a new recording format developed for ARRI  will allow up- sampling in post to UHD.

It was also announced recently that a similar software upgrade will allow ARRI’s AMIRA to record full 3840 x 2160 UHD ProRes up to 60fps in camera.  It will also be able to record ProRes 3.2K in camera giving shows that want to mix Alexa and Amira the same straight forward path to UHD. However, it is our understanding that ProRes UHD is technically not possible on-board with ALEXA.

The Alexa does have an option called “Open Gate” that records the full 3.4K Alexa XT sensor area for an optimal up-sample in post to a 4K DCP.  This Open Gate technique has been used on numerous productions, including Warcraft, San Andreas, Pixels, Goosebumps and Sicario, the latest movie lensed by Roger Deakins, ASC, BSC.