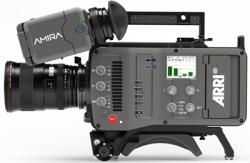 ARRI has announced the upcoming release of Software Update Packets: SUP 2.0 and 3.0 for AMIRA cameras. SUP 2.0 is said to unlock 4K UHD recording for high-resolution pipelines, while the SUP 3.0 enables MPEG-2 MXF recording for streamlined, broadcast-friendly workflows. These two major software updates coming in the first half of 2015 will offer flexible, re-programmable system architecture, allowing AMIRA to continue to expand in functionality over the coming years.

The key new feature of AMIRA SUP 3.0 is the ability to record MPEG-2 422P@HL at 50 Mbit/s in an MXF wrapper. This XDCAM-compatible MPEG-2 recording format allows television productions to take advantage of AMIRA’s image quality and ergonomics, while utilizing a low-bandwidth codec that can easily be integrated into typical broadcast environments and workflows.

In order to further ease the integration of AMIRA into fast-paced workflows, a new audio accessory will be released in the form of an extension to the back of the camera body, that will equip AMIRA with a slot for a portable audio tuner/receiver. This will allow signals to be received wirelessly from either the sound recordist’s mixer or straight from radio microphones, helping to create as cable-free a configuration as possible.

Other features of SUP 3.0 will include a versatile camera remote control interface for multi-camera live or scripted productions; Super 16 mm lens support; an intervalometer function for time-lapse applications; and a host of general usability enhancements.

Meanwhile, AMIRA SUP 2.0, scheduled for release in March 2015 will feature 4K UHD recording as the the major new feature. Enabled by the software update, it is activated through the purchase of a 4K UHD license at the ARRI License Shop (and a camera sensor calibration at an ARRI service center for cameras purchased in 2014).

The new 4K UHD recording format has been developed for productions that need to generate high-resolution deliverables. It allows ProRes codecs up to ProRes 4444 to be recorded in Ultra High Definition 3840 x 2160 resolution directly onto the in-camera CFast 2.0 cards, at up to 60 fps. Optional in-camera de-noising, sharpening and detailing tools permit the image to be optimized for specific applications or matched to different cameras and lenses.