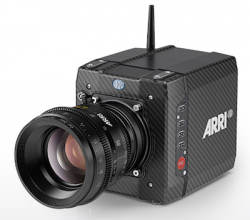 The ARRI family just got Bigger…and smaller, with the addition of the ALEXA Mini. The new camera extends the Alexa line with a compact and lightweight form factor while maintaining Alexa image quality. Designed for specialized shot-making, the Mini is meant to compliment a full ALEXA shooting kit within a single well established system that is also supported with Codex recording.

The ALEXA Mini can be operated in a number of ways: by wireless remote control, as a normal camera with the ARRI MVF-1 multi viewfinder attached, or with an on-board monitor and controlled via the user button interface on the camera body. Light enough to be held at arm’s length in a hand rig, its compact size also makes it ideal for tight shooting conditions.

Equipped with a PL mount, it features a built-in lens motor controller allowing it to drive new active lens motors, while ARRI Lens Data System (LDS) technology provides frame-accurate metadata for use both on-set and in post. In addition, the ALEXA Mini’s interchangeable lens mount can be replaced with any of those designed for the ARRI AMIRA, allowing the use of B4 video and EF mount stills lenses. Wi-Fi connectivity means that iOS or Android devices can be used to remotely control camera functions such as the motorized internal ND filters, which permit rapid responses to changing light conditions without adding bulk to the camera configuration.

Equipped with a 4:3 sensor, automatic de-squeeze mode for anamorphic productions and frame rates of 0.75-200 fps, the ALEXA Mini records ProRes or uncompressed ARRIRAW either in-camera to CFast 2.0 cards or to a specially-designed external Codex recorder that can record image streams from up to four ALEXA Minis simultaneously which could provide good options for multi-camera setups such as 360° plate shots.

Like the ARRI AMIRA, the ALEXA Mini can record 4K UHD ProRes images, facilitating real-time 4K UHD output for high-resolution deliverables. The ARRI ALEXA Mini is scheduled to begin shipping in May 2015, with orders being taken from March.