Announcing The Premiere of the Digital Cinema Show 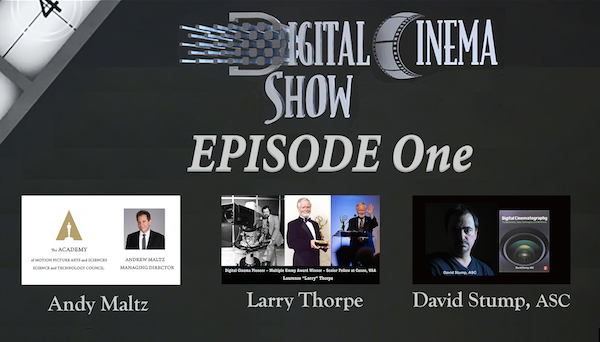 The long awaited premiere episode of the Digital Cinema Show, our new web series covering the art and science of motion pictures is now on-line and ready to view.  Episode One features three interviews, the first with Andy Maltz, Managing Director of the Science and Technology Council of the Academy of Motion Picture Arts and Sciences.  Andy sat down with us at Cine Gear Expo where he described the Technology Council’s varied efforts to help the Industry keep up with Cinema technology including the new Academy Color Encoding System, (ACES).

We also caught up with Industry Pioneer Larry Thorpe, a Senior Fellow with Canon USA, at the last CES convention.  He had just been awarded Charles F. Jenkins Lifetime Achievement from the Television Academy for his body of work advancing digital image acquisition.  Larry was there at the very beginning of digital cinema and shares a bit of that history with us, as well as what he sees for the future.

Episode One concludes with an extensive interview with renowned Visual Effects expert and Cinematographer, David Stump, ASC who joined us to discuss his new book, entitled “Digital Cinematography”.

We could not bring you this content without the continued support of our sponsors, and in particular Bertone Visuals, who contributed toward this first episode.  We also need to acknowledge our many volunteer DCS crew members including Producer David Mahlmann, Cinematographers Cameron Canon, Don Platon, Scott MacDonald, and Alex Sax, as well as for audio recording and post production, the versatile Christopher Scott Knell.  Thanks also to Cine Gear Expo and Canon Hollywood Center for providing production venues for this episode’s interviews.

Episode Two is now in post production and will feature Light Iron’s Michael Cioni discussing such technology trends as Anamorphic and the value of 8K, an interview with Director of Photography Michael Goi, ASC, as well as previously unseen clips from the archives including a discussion with Visual Effects Innovator, Douglass Trumbull and cinematography legend Allen Daviau, ASC.

The latest episode will always be available by visiting the Digital Cinema Show link from the DCS Home Page, and Episode One is also now directly accessible on Vimeo here: