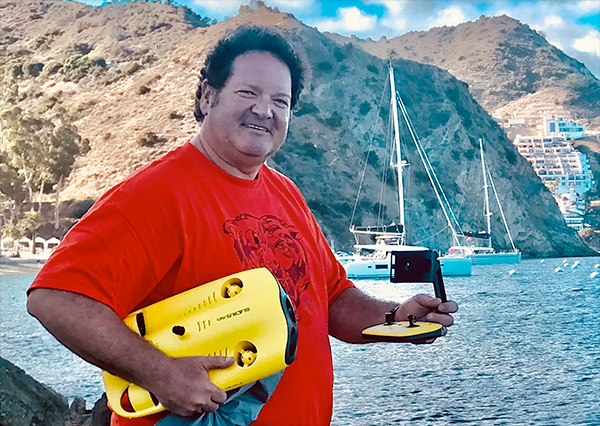 When I first set out to put the Gladius Mini through its paces, I tossed it in the backyard pool just to play with the controller and get used to the joystick commands. This would be a good pre-workout for the sub and would minimize my learning curve before planning a trip out to Catalina Island. The pool is where I discovered that the sub won’t go anywhere until you unlock the motors either by the app or on the controller button marked with a padlock.  I was thankful that the connections were straight forward and all WIFI and Bluetooth signals were in sync.

Then came Catalina. I searched for the popular dive spot on the right side of the harbor and began to unload the gear and make the necessary connections. I am not a certified diver so the chance to be able to see what they see from dry land was an opportunity I couldn’t pass up. What an eye-opener! I was amazed that underwater colors already looked quite good despite not having made any adjustments in the app.

Cruising past vivid coral and seaweed, the fish instantly came into view.  “Fluorescent” orange and gray striped fish swam into the picture and I became mesmerized by the undersea life I finally got to see first-hand. The seaweed and other plant life in the environment were just as interesting as the fish swimming around it.

The never-ending push of ocean currents will drain the internal battery much quicker than a stagnant pool.  That’s why I made the effort to test the sub where the divers were. It’s a good lesson when using this sub in sea water. Do your homework! In the ocean you may only get up to one hour of life before having to recharge so make the most of it!

The folks at the Chasing Company believe that drone pilots are a good target for their underwater “drone” camera subs. Perhaps they have a point. The Gladius Mini allows the “pilot” to operate using a controller that is very similar to those used with aerial drones.  You control the drone’s movements with two joystick controls. 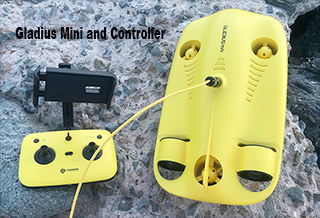 As it is delivered, the controller’s left joystick will control diving and surfacing with corresponding down and up movements. Left and right movements would be that same joystick in those corresponding directions. The right joystick up and down movements will propel the sub forward and backward respectively. There is an option to customize the controls to your liking. To lift just the head of the drone up or down requires the turn of a plastic wheel located on the right side. Once you get all these stick maneuvers down the drone navigation becomes pretty straight forward.

Unboxing: Let’s take a look at Gladius Mini’s system. In the box you will find the main system components: the sub, a WIFI base station, a controller with device bracket (you can use a tablet or your smartphone) and a wound tether line. You also get a nice absorbent towel for wiping the components clean after use, and switchable weights depending on if you’re diving in seawater or freshwater.  Craig Glover of Chasing tells me that these switchable weights are necessary due to the salt levels in the ocean. “The higher salt levels in the ocean cause more of a surface push and therefore require a heavier weight.”

As most drones do, Gladius Mini works with its own app which you can find in the app store. I also recommend getting the Chasing backpack made for the Gladius Mini. It has specific compartments for all the components and is quite nice. Still, carrying the system around on foot to the best dive sites can be very taxing. There is some heft to this system.  I found myself wishing the pack had a telescoping handle and wheels to make life easier. Perhaps a future model?

How does the system work? Gladius Mini works with its own WIFI signal produced by the small base station. You have a choice of 2.4g or 5g which will correspond with the WIFI you choose on your smartphone. A blue LED light will signify which signal you choose on the base station. Click the reset button to change between the two, just remember to match that on your device. You will also need to open up Bluetooth in your smartphone settings, find Gladius and make the connection to your controller. Once you have attached the tether line from the base station to the sub and your WIFI and Bluetooth have been set, you will see the live image on your screen.

Tweakers should be pleased with the camera settings options offered by the Chasing Mini app. In Photo mode you are able to adjust the ISO setting from 100 to 6400 when switched to Manual. ISO adjustments are not yet available in Video mode. You also get auto white balancing but can make manual RGB settings to tweak it exactly where you want it. Why stop there? You can also adjust the overall color tone, contrast, sharpness, noise level and color saturation! Gladius Mini will shoot 4K video at 30 fps and shoot 1080p in 30, 60 and 120fps. 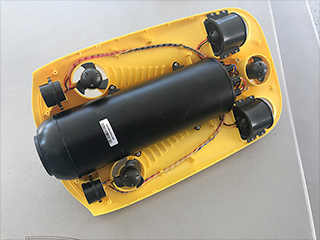 The sub itself is a marvel of engineering. Yellow in color, its sleek design has a total of five thrusters. Two thrusters up front can propel the sub to speeds up to four knots. Three thrusters in the back stabilize the sub for smooth video shooting.  The intensity of the frontal spotlights (one on either side of the camera) can be controlled by a spin of the dial located at the left side of the controller. The top of the sub is where you will make the connection to the tether line. It has an O ring at the connector to keep water from seeping in.

As mentioned earlier, the sub feels weighty when you hold it. This is due to the water-tight system within the housing. If you remove the screws holding the two main plastic housing pieces, it will reveal a metal water-tight tube where the motors, battery and camera are located. It’s quite an ingenious system that manages to keep water out.

Conclusion: Considering the technology that went into the making of the Gladius Mini Underwater Drone, it is affordable at $1499. No longer do you have to be a certified diver to enjoy underwater landscapes and sea life! The image quality is excellent considering the 1/2.3” sensor and the fixed ISO for motion capturing. The Gladius Mini app gives the user a surprisingly plentiful amount of manual camera adjustments to play with.

The benefits for underwater cinematography with this sub are obvious, but there are benefits on the enterprise side as well. You can now find underwater trouble areas for inspection, including boats, piers, docks, and utility structures, all from dry land. Being able to pinpoint the location of the trouble before the dive will save time and even money.

About the author:  David Tolsky has been in the camera department of the film business for over 30 years. David is an FAA Certified UAV Remote Pilot In Command and is Owner/Operator of Aerial Domain LLC:  www.aerialdomain.com  He is a current member of ICG, DCS, and Society of Aerial Cinematographers.