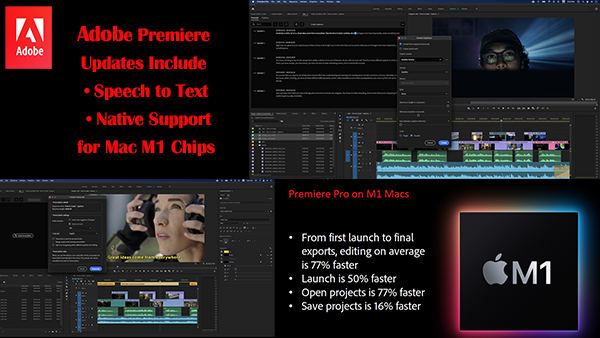 Captions have become increasingly important in the last few years, not only to serve the hearing impaired, but also critical for engaging viewers on social platforms since so much of the content is seen on mobile devices set on mute. Adding captions has heretofore been time-consuming, expensive, and fraught with errors.  Adobe hopes to remedy that situation with Speech to Text in Premiere Pro, the only NLE offering an integrated and automated workflow for creating transcriptions and captions. Speech to Text is, on average, 5x faster than other captioning workflows and included with a Premiere Pro or Creative Cloud all apps subscription at no additional cost.

One in five people around the world live with some level of hearing loss, but research also shows that viewers watch captioned videos longer, recall content better, and the content ranks higher in search results because they are more discoverable in SEO.  Premiere Pro now allows users to complete each step of the captioning workflow inside their video editing application. Speech to Text can save hours, automating the time-consuming tasks while still giving the user full creative control over the results.

There are additional time-saving advantages, such as new ways to search and navigate video sequences: double-click on a word in the Text panel and the playhead moves to that position in the Premiere Pro timeline. Speech to Text includes support for 13 languages, and when changes are needed, such as correcting the spelling of names, users can easily edit the text in the transcript. When the transcript is ready, Speech to Text automatically creates captions on the Timeline.  Once the words are on the Timeline, captions can be customized using the design tools in the Essential Graphics panel.