Sitting through a rather ho-hum Super Bowl game owing to it being so lopsided, I wasn’t that upset when the Time Warner Cable went out just before half-time. It took a while to switch to the antennae, and my only concern was that I would miss the expected 30th Anniversary Apple Macintosh Commercial. It was with this legendary commercial directed by Ridley Scott at the 1984 Super Bowl that Apple introduced the Macintosh. It featured a colorful discus thrower charging her way through a colorless Orwellian world to smash the giant screen image of Big Brother lecturing the masses.

Well, as turned out, I didn’t miss a thing; Apple did produce a very interesting commercial to mark the 30th anniversary, but instead of running it at the Super Bowl they are showing it on the YouTube and on the Apple Website. They again turned to Ridley Scott, who participate as a Producer, but turned the directing reins over to his son, Jake Scott. What’s more interesting is the fact that this pretty stunning commercial was shot all on one day and all on the iPhone.

On January 24, 2014, 15 camera crews were dispatched all over the world. From sunrise in Melbourne to nightfall in Los Angeles, they documented people using Apple products, and shot over 70 hours of footage which was monitored and edited from a Master Control in Los Angeles. 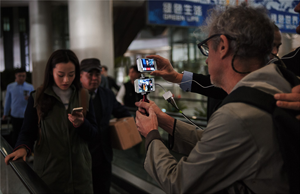 In the two iPhone configuration above, the bottom iPhone is the Taking Camera and top is used for transmitting to the Director via Facetime.  The image below features a look at Master Control in Los Angeles. 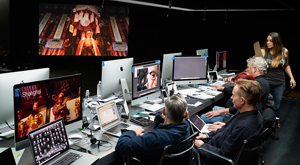 The coverage included Archeologists creating 3D renderings on location in Pompeii, a Journalist in Puerto Rico editing news footage in the back of a jeep, kids in Paris making music on an iPad, etc. etc. etc.

Assisted by a team of 21 Editors, the piece was Edited by two time Academy Award winning Editor, Angus Wall, (The Social Network and The Girl With the Dragon Tattoo), and again, every frame was shot with an iPhone. To view the commercial with more behind the scenes details visit: