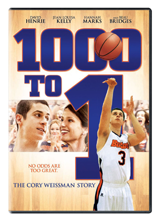 1000 to 1, a movie shot and co-produced by James Mathers is available on iTunes, Amazon Instant Video, Google Play, Vudu, Sony Entertainment Network, Target Ticket, Xbox, and Cinema Now.  Also available for purchase as a DVD at Amazon and at national retailers including Walmart and Target.  Please see this little movie, and help spread the good word.

We wouldn’t normally plug a movie we happened to work on, but this one is special.  Not because of the cinematography, which aptly serves the story, but will never win any awards.  And it’s not the outstanding cast including performances by David Henrie (Wizards of Waverly Place.), Beau Bridges (The Descendants), Jean Louisa Kelly (Mr. Holland’s Opus), Michael Lerner (Oscar nominated for Barton Fink), Hannah Marks, (Necessary Roughness), and Cassi Thomson (Big Love).  It’s because it is a good movie that you will enjoy, but that you would otherwise probably never be aware of.  Without the star power or edgy subject matter to garner a theatrical release, it will never get the advertising and promotion necessary to make a mass audience aware that it exists.

“1000 to 1” is the inspiring true story of Cory Weissman, a high school basketball star who scored 1,000 points in high school and was expected to be a standout athlete in College. Following a catastrophic stroke at the end of his freshman year, the film chronicles his comeback with the support of his friends, family, and entire college community. Even the opposing team gets in on the act with an amazing show of sportsmanship by helping Cory make the first and only point of his college career.

DCS Members may recall an essay last year, “With A Little Help From My Friends” where James Mathers detailed the Behind-the-Scenes technical story of this movie, which would not have been possible without a lot of good will from the DCS community.  See article.

After you see it, please share your thoughts on the movie via the DCS Facebook or Linked-In page.  THANK YOU!