Why We Ride – Thinking Differently to Create Successful Indie Distribution 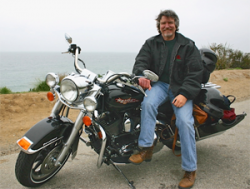 With the accessibility offered by ever more affordable tools, it has never been easier to make an Indie feature.  However, I don’t think it has ever been more difficult to earn a return on an investment in such projects.  From unscrupulous Distributors to piracy, not to mention the huge glut of product enabled by this very “democratization” of filmmaking, it seems nearly impossible to get your movie seen, let alone make a profit.

The success stories are few and far between, and in order to better the chances that our cinematic productions will also be successful business ventures for our investors, we may need to start thinking outside the box.  I would like to offer as a case study, a self distributed documentary film recently made by my two friends, Bryan H. Carroll and James Walker.

Producer/Director Bryan H. Carroll has a background working Post on such titles as Titanic before starting to work as a Producer with Michael Mann.  With Mann, he is credited as Co-Producer and 2nd Unit Director on several of his movies including Collateral, Public Enemies, and Miami Vice as well as having worked on his latest, the upcoming Blackhat.

I met, and was impressed by the film’s other Producer, James Walker when he served as Producer on a little movie I shot a couple of years back called BRAKE.  James was a veteran of two Fortune 500 financial groups before entering the entertainment industry to assist with the successful independent distribution of the documentary One Six Right: The Romance of Flying.

These two gentlemen know their producing ropes, how to get movies made, and how to get them seen through traditional distribution methods.  However, for their latest venture, the documentary, Why We Ride, they chose a very novel route to get their movie out there and into profit.  In this essay, we’ll look at the movie and how they built a community to promote it. 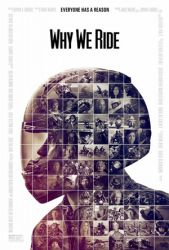 Although the title, Why We Ride would ostensibly suggest a mission to explain a motorcycle enthusiast’s passion to the uninitiated, I would say it is really more a case of “preaching to the choir,” a nonstop celebration of all things Motorcycle.  In his review for motorcycle.com Evans Brasfield called it “an 89-minute love song to the sport of motorcycling in all its forms.”  The film delves into the history of motorized two-wheel vehicles, the sport, and the culture.  By Motorcycle Culture, I’m not referring to Biker Gangs like the Hells Angels or Mongrels, but instead to the sense of community that grows around a common love of bikes.  Having been a rider myself since I was a teenager, I fall squarely into the target audience, and I loved the movie.

Why We Ride is a visual treat; shot by Andrew Waruszewski and Douglas Cheney using the Canon C300, C500 and Canon optics.  Adding a Codex recorder allowed them to also shoot many of the sequences in 4K with the C500 at rates up to 120 frames per second.  I was lucky enough to see the premiere last year on the very large screen of the Motion Picture Academy’s Samuel Goldwyn Theater and what really struck me was the vivid use of color.  Suffice to say that I liked the look as well as the content.

Although the mission of this essay is to explore the movie’s distribution, my reaction as both a motorcycle enthusiast and friend of the Filmmakers does come into play because this distribution method required them to reach out and build an audience.  No one is going to buy a ticket to a movie they’ve never heard of, and a project like this needs to engage the potential ticket buyer in some way if they are going to make the effort and investment to go and see it.  There is no name talent or sensational news to uncover; it is more about tapping into an existing fan base, in this case the community of motorcycle enthusiasts, then building from there.

There are established ways to reach this community, via Motorcycle magazines, dealership networks, racing events, and expos, and the Producers took full advantage of them all.  They also entered and won awards at several automotive related film festivals including Best Documentary at the prestigious AUTOMOTO International Film Festival.  However, they needed the power of social media to really gain traction.

With the tagline “Inspire, Educate, Celebrate,” sites were set up on Facebook, Twitter, Instagram, YouTube, and Google Plus.  Trailers and clips were posted to these sites, as well as behind-the-scenes photos and videos.  The outreach began with friends, family, and the various communities they were involved with.  I know because I’ve been on their mailing list since they were in production.   Likes and Followers begat more Likes and Followers, and a new community of fans was created.  Their on-line campaign was designed to sell DVDs and VOD, but where it gets more interesting is that they also took advantage of social media to promote a nationwide theatrical release.

The distribution method known as “Four Walling” has been around since the dawn of Cinema but has been infrequently implemented of late.  As practiced by the likes of the Warner Brothers back in the early 1900’s, long before they had their own Studio or Theater Chain, it involved renting a venue, then taking a print of their movie around and setting up limited engagement or one-off screenings.  They would keep the lion’s share of the proceeds leaving the Theater Owners to make do with the sale of concessions on top of whatever rental fee they may have received.   This is in contrast to the more common methods of film distribution, where ticket sale proceeds are shared between theaters and distributors with the lion’s share usually going to the Distributor, and little if anything ever getting back to the Filmmaker.

In the Sixties and Seventies circuits of theaters and drive-ins open to the arrangement were developed and companies like Sun Classic Pictures and Pacific International Enterprises made much of their revenue in this way from titles such as Grizzly Adams and In Search of Noah’s Ark.  Filmmaker Tom Laughlin used the four-wall technique for his film Billy Jack after accusing his original distributor, Warner Bros. of improperly handling the movie.  More recently, in the 1990’s, the technique was employed by Warren Miller for many of his Action Surf and Ski documentaries.

Enter the “Digital Age” and a company called Tugg has modified these techniques, leveraging social media to create a network of theaters around the US that are open to alternative programing methods.  In a nutshell, the way it works for the Filmmaker is that they supply the theatrical content via DCP and promote a screening, currently in just about any city across the US.  In fact Tugg claims access to over 85% of the screens across the US, and are currently working to expand internationally.

Patrons commit to buying tickets in advance on the Tugg website, but like Kickstarter, the sale is only completed after a specified goal is met and the screening is confirmed.  In this case, the goal is a certain revenue requirement based on an agreed minimum return.  This minimum is the sum required by the theater, (which has been pre-negotiated by Tugg and varies by venue,) whatever income the Filmmaker specifies, along with a percentage margin of 20% to Tugg, plus another 5% which goes to the “Promoter.”  After that threshold is met, further profits are shared on a percentage basis.

For example, based on minimums of $300 to the venue, $200 to the Filmmaker, $40 to the promoter, $160 to Tugg, with $100 reserved for miscellaneous costs like shipping, a Virtual Print Fee, etc., you would have a Minimum Revenue Requirement of $800.  At $10 per ticket, that would require selling 80 tickets before the screening could be confirmed and scheduled.  If the screening went on to sell 200, or two and a half times the number of tickets, for a total revenue of $2,000, then about 2.5 times more would go to the venue, the Filmmaker, Tugg, and the Promoter.  (It can get a little complicated, but full details are available on the Tugg website: www.TuggInc.com).

Since the cost of the screenings are covered by the pre-sale of tickets, once confirmed, Filmmakers are guaranteed to get paid at least the minimum they set, and bear no financial risk.  In addition to offering access to their exhibitor network, ticketing technology, and financial fulfillment, Tugg services also include logistics management, order fulfillment, and quality checks for every event.  Filmmakers are encouraged to also “eventize” their screenings with special features like in-theater introductions, discussions, Q&As, raffles, etc., although their is no requirement that the Filmmaker attend or have representatives at any screening.

It is the “Promoter” that can step in to help organize screenings, thus lifting some of the burden for the Filmmaker.  Although, as in the previous example, the Promoter is rewarded with a 5% margin of the ticket sales, they are usually not in it for the money.  Instead these are individuals or groups who, for whatever reason, care about getting the movie seen.  They might just be huge fans who want to share the joy they feel for a movie, or they might be a group looking to promote their political agendas or religious beliefs.

Besides handling the framework to sell tickets, Tugg has also created a template to help set up avenues for ancillary revenue.   In this way, a screening can be an excellent means to anchor a charitable event with the option of Tugg conveniently handling payment processing for donations.

The Filmmaker also has a new revenue stream for selling promotional items which might include hats, T-Shirts, posters, take-away DVDs of the movie, or CDs of the soundtrack.  As we have seen from the evolution of the Music Industry, the sale of promotional merchandise has become a key source of revenue, sometimes eclipsing income from actual music sales.  On-site sales of merchandise and CDs are also extremely important in helping Musicians finance concert tours.

Tugg not only helps with advance ticket sales and on-site merchandise sales, but perhaps even more importantly, they provide e-mail contacts for every ticket buyer.  In this way, the Filmmaker or Promoter can start to build a community of fans that may be interested in future events, purchases, and can help spread the word to create new fans.

In the case of Why We Ride, several charity screenings helped bring in donations, spread the good word about the movie, and still provided income to the Producers.  However, most of their screenings were promoted with the help of Motorcycle Dealers.  Dealer networks such as Harley-Davidson were a ready made distribution channel that served everyone’s purposes by promoting motorcycling in general, creating brand awareness, and helping to sell motorcycle clothing and accessories.  Several motorcycle clubs also organized screenings which became special events coordinated with activities such as group rides to the venue, and novelties like “motorcycle only” parking in front of the theater.

Why We Ride has now enjoyed scores of theatrical screenings, and sold lots of DVDs and promotional merchandise.  It has already been a success in terms of distribution while the traditional avenues such as cable, broadcast, and mass market retail, (Walmart, Redbox, etc.,), as well as foreign markets have yet to be exploited.

Producers Bryan H. Carroll and James Walker are part of a growing movement where the Artist becomes Entrepreneur and the Filmmaker must become their own Distributor.  If you’re interested in seeing the movie for yourself, it is available at the usual places, Amazon, iTunes, Xbox, etc.  If you like, you can also organize a screening with 80 or so of your closest friends and see it on the big screen.  Here’s a link to the website to find out more:  www.WhyWeRide.com