Who Needs Another Film Festival?

Regular readers of my monthly essays know that I tend to write about the things I’m mulling over.  Whether it’s buying or selling gear, trying to decide if I should invest my time in learning about the latest technology craze, (such as VR), or figuring out the best archive solution for all the content DCS generates.  Researching these topics not only provides fodder for my essays, it also helps me sort through sometimes complicated subject matter to clarify my decision making process. 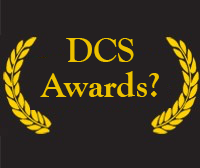 It has been suggested to me many times over the many years we’ve been running the Digital Cinema Society, that we should think about organizing some kind of a film festival or event to honor the achievements of our members.  What I’m pondering now is, who needs another film festival?

There have been almost ten thousand film festivals organized in the last fifteen years, with only about 3,000 having endured.  In fact, only 39% of film festivals run more than once.  This tells me that there were a lot of other folks who thought it would be a grand idea to start a festival, but maybe didn’t realize what they were in for, and I don’t want to make the same mistake.  Other interesting stats chronicled by UK Filmmaker, Educator and Festival Consultant, Stephen Follows:

• Half of all film festivals run for less than 7 days

• October is the busiest month, with five times as many festivals as December.

There are, of course, the major established festivals such as Cannes, Sundance, Venice, Toronto, and Berlin.  And there are many “mini-majors” like South by Southwest, Telluride, Tribeca, and Slamdance.  There’s genre specific Horror, Comedy, and Anime, among innumerable others.  Even within a classification such as festivals dedicated to Shorts, there are some limited to a specific time length, such as the “Just a Minute” fest for which I have served as a Judge.  In this case, the whole story must be told in no more than 60 seconds.  There are others like the 48 Hour Film Festival that limit the time which can be devoted to making the entry content; participants are given a log line and 48 hours later it has be complete and ready to screen. 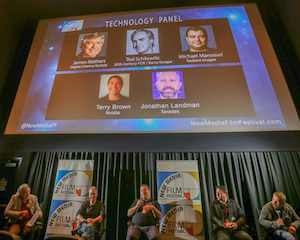 There are now many festivals dedicated to certain formats and technologies, such as DSLR, Smart Phone, 3D, VR, or the somewhat broader New Media Film Festival at which DCS hosted a recent VR Technology Panel.  There are also a handful of festivals sponsored by various electronics manufacturers that require the filmmakers to exclusively use their brand in the production of the piece.  So, with lots of great festivals already available, my question becomes, what can DCS bring to the table that can be a benefit to our members and the Industry at large?

In order to answer the question, I’ll first list some goals:

• Raise the stature of the Digital Cinema Society.

• Gain recognition for the creative talents of our members, and help get their work seen.  (This is a big one, because scoring a theatrical release is a feat that is getting evermore elusive in the current distribution environment.)

• Gain recognition for the technical achievements of those who provide the tools and services we use to make movies.

• Give DCS members a voice in honoring the very best our Industry has to offer, a chance to vote on the best achievements in major theatrical releases.

It seems to be that working toward the aforementioned goals will require a multifaceted approach, perhaps broken down by budget level.  After all, it would be unfair to judge a picture with a total budget of under a million dollars with one that exceeded one-hundred million to produce.  An even better demarcation could be whether or not the project has enjoyed a theatrical release.  So I will be proposing a section open to all members in good standing where they can enter their own projects on-line in the following categories:

• Feature length narratives that have not been theatrically released.

In keeping with our inclusive and nonprofit modus operandi, we would keep entry fees very low or even free to supporting members.  These entries would be judged by a panel of volunteers with the finalists seen by some of our most prominent filmmaker members.  The winners would then be screened in a theatrical venue, TBD, at a gala awards event to be held during “Awards Season” in the Hollywood area.

Another aspect of the awards would be to honor the fine companies that provide us the means to create our content.  Our judges would nominate several companies for their innovative products or services and final voting would be open on-line to the entire DCS membership.

A third category of competition would be for major theatrical releases also to be nominated by our team of judges with final voting again open to the entire DCS membership.  Finalists would likely be movies that were already in consideration for awards such as the Oscars.  As our members in production hubs such as L.A. and NYC are aware, we already get invited by the distributors to many of the major Awards Season screenings.  However, giving our members a say in recognizing such releases could entice the few that don’t already include DCS members on their lists of awards season screening invitations.

There are already many sister organizations giving awards in specific creative technology categories like the ASC for Best Cinematography, the ACE for Best Editing, or the VES for Best Visual Effects, so I am suggesting that we do something a little different.  Since our membership is so diverse, crossing many of these same disciplines, and in order to celebrate the collaborative nature of making movies, I would like to propose we give an award for the “Best Collaborative Use Of Creative Technology”.  And no, entries would not have to be digitally originated; we are format agnostic and still love film.

This award would honor the best team effort to tell a story via motion picture, honoring the DP, Editor, and VFX team.  These Filmmakers, who are recognized as being at the top of their field, would then be invited to our Awards Gala providing not only the chance for us to pay them tribute, but also to interact and share insights with other attendees.

Perhaps what I’m describing can more accurately be described as an Awards event, rather than a Film Festival, but either way, I’m leaning toward giving it a shot.  As Lucille Ball used to say, “I’d rather regret the things I’ve done than regret the things I haven’t done.”

So, those are the broad strokes of what I’m considering and now is the time to seek your input.  If you’re a DCS member in good standing, I encourage you to visit this Survey Monkey link and share your thoughts.  As you’ll see, I will also be requesting volunteers to serve as on-line judges.  And lastly, should we move forward, we’ll be looking for a good name:

Survey results and project progress will be reported in the next international DCS eNewsletter.