Excerpted from the Digital Cinema Society eNewsletter, May 2015
By James Mathers, Cinematographer and Founder of DCS — Photos by Mark Forman, courtesy of Mark Forman Productions

We survived NAB 2015! I think that’s the general sentiment of the folks who work the show as they wrapped up another year. Well over 100,000 people gathered to commune and share information about the technology of entertainment production, post, and delivery across every kind of platform. It’s a lot more than the name might imply, a convention for Broadcasters.

There was a lot to see with new 4K Cameras, Lenses, Accessories, Lighting, Workflows, Cloud and Local Storage Solutions, and Drones, as well as some pretty cool new tools such as a new Focus Assist system called “Halo” from Redrock Micro; (you really don’t want to miss that one).

If we didn’t cover some new technology, it was only because there wasn’t time. With only three and a half days, and so much to see, there was no way to cover it all. To view our Streaming NAB 2015, please visit the link following this essay.

Instead of just rehashing what you can view for yourselves in our interviews, in this month’s eNewsletter, I would like to tell you a little about the process of bringing you this streaming coverage, and how it has evolved in the years that we have been at it. It is a testament to how much technological change we’ve seen in our industry in a little over a decade since we began this effort. 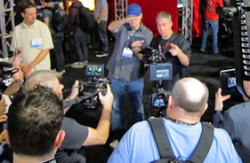 Interview crews shooting for all manner of media are omnipresent today, but when we started covering NAB, there were very few others roaming the convention floor, a few ENG crews from the networks and local stations. There wasn’t yet much like this happening on the web and it certainly was not HD.

It was a time before YouTube, Facebook, Twitter, iPhone, or iPad; (a time even before my hair had turned grey).  Internet connections were painfully slow, and viewers had trouble smoothly playing our downloads; (although like everyone else, we call it “streaming”, the technically correct term for prerecorded material played on the web is “progressive download”). Even given the small standard def player window we used, (a 4/3 aspect ratio at 480 x 360), if it was not highly compressed, playback would stall while the viewer had to painfully wait for buffering. 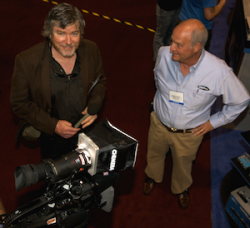 We shot the first year with a Sony Betacam style convertible camcorder with a Standard Def DV back. It was big and bulky compared to today’s cameras, and not particularly sensitive to light. As a three chip, it was better than some, but none of the cameras available at that time could brag about their low-light capabilities. Camera demos were brightly lit, and to shoot an interview in front of them, required we boost the subject in the foreground. We ended up needing a full size Magliner to hold the lights, stands, stingers, camera batteries, tripods and such that we needed to drag around. Weaving through the crowds was no easy task, but as the technology improved, we eventually figured out better systems; (more on that later).

We had a booth, but only recorded a handful of interviews that first year, and wouldn’t even dream about editing them on-site. Instead, we collected the material on Mini-DV tapes, and brought them back to L.A.. They were then turned over to our friend and Postproduction Guru, Philip Hodgetts who would capture, edit, and prepare the segments for the internet. As a Trainer, Author, and Plug-in developer, you can always count on Philip to be using the most current NLE, which at that time was probably Final Cut Pro, version 3 or 4.

A week or two later, we would gather the finished edit on a Firewire 400 hard drive and deliver it to our volunteer Webhost, Nightsky Hosting, a side business run by Cinematographer, DIT, and Founder of the Double Data/R3D Data Manager, Conrad Hunziker. Conrad would then upload the files to his server, and voila!, in only about three weeks time the interviews were ready for streaming.

The post process has accelerated considerably over the years, and we now have the interviews up and streaming within a couple of hours of shooting them. Our Editor, Christopher Knell, of Fireline Studios, spends most of NAB confined to a hotel room across the street from the convention center. He gets to visit the show floor only briefly to pick up our media recorded on CF cards.

The entire post process now happens within the Adobe Creative Cloud suite of applications, Premiere, After Effects, Photoshop, Audition and Media Encoder, which compresses and uploads everything to Vimeo. Our streaming partner, StudioDaily uses a different hosting company, which needs to be uploaded separately, but even so, he usually manages to have that done within the day. Note that internet speeds at the hotel, and probably all over NAB, are considerable faster during the day when everyone is busy at the convention. As soon as it closes, and everyone is back at their hotels checking e-mails things seem to grind almost to a halt. 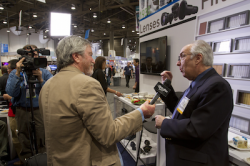 We use a small but effective Canon XF305 camcorder, that Canon has graciously provided for the last several years. People often ask why we don’t use a DSLR, or the latest and very greatest Digital Cinema camera. The XF305 uses a 1/3” sensor which allows for greater zoom range and depth of field in a very compact form factor that makes it easy to tote around. The quality, even at the lower bit rate we use to speed up the post, is surprisingly good. It records to relatively inexpensive CF cards which are easy to transport as we trade out with the Editor and recycle them throughout the day.

Another question I often get is why we don’t use one of several new cameras with built in WiFi capability so that we could theoretically send the feed directly to the web to be viewed or edited instantly. Note the word “theoretically” in the previous sentence; I use it because, while it could be a good solution in other less crowded WiFi conditions, trying to get a solid connection from the show floor is the bane of most Exhibitors, especially those counting on such connections for their live demos. Even phone hotspot connections sometimes get spotty with such great demand.

Our lighting needs are handled by a Litepanel BiColor 1×1 which runs most, or all of the day, off a single Anton Bauer battery which we leave in the base of our collapsable rolling crate/cart as a “sandbag” with a light stand latched to it. We very occasionally supplement that with a Litepanels Croma atop the camera which is also convertible from daylight to tungsten balance with the turn of a dial. 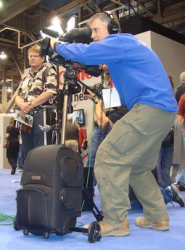 Our camera support is via a Petrol Bags product which was known as the Cambio, but sadly, this product has been discontinued. As a rolling camera bag with a center column and legs that extend to create a tripod, together with the Sachtler FSB-6 Fluid Head, it is perfect for this application. I hope Sachtler, who now handles the Petrol line, will develop something similar before our current solution, which we’ve now been using for about 5 years, is laid to rest. 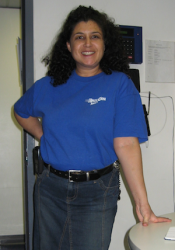 Planning starts in February when DCS Executive Director, Charlene Mathers starts contacting Exhibitors trying to assess who might have interesting technology to present and who would be the best available representative to be on camera. She then uses her background as an Assistant Director to comprehensively schedule each interview in a way that creates the least travel back and fourth between the various halls. Even given such careful planning, our iPhone fitness apps logged Cinematographer, James Marsh and I at over 4 miles a day walking around the convention. If you’ve never been there, it is a massive show, only dwarfed by CES which is so big it must be spread between different convention centers located around the city of Las Vegas. 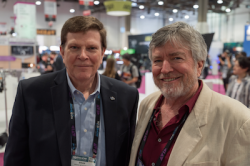 This year, we were lucky to have the Co-founder of DCS and President of our East Coast Chapter, Brian McKernan, join the effort. He traveled ahead of our crew from booth to booth trying to ensure our interviewees would be ready when we got there and doing a little pre-interview to identify the topics they would be covering.

Our Vimeo stats inform us that people from all over the world are viewing these NAB interviews. The views run to the tens of thousands in the week of the convention, and over the course of the year, the count swells to well over 100K. This does not even count any viewership through our Streaming Partner’s site, StudioDaily.com, which likely boasts even higher numbers. 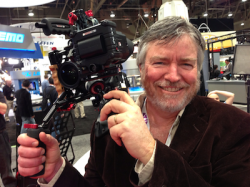 It’s a big effort and a lot of work, but we are proud of it. I think it serves a valuable service for people who might be working or otherwise can’t make the trek to Las Vegas. In fact, I worry every year that some work obligation might come up to keep me from attending myself. I’ve heard from a lot of people over the years, that they depend on us, especially at NAB when so much new technology is introduced, to stay informed, and I look forward to continuing the tradition in 2016 and beyond.

We’ll keep trying to improve our methodology using the best tools available for this purpose to bring you comprehensive coverage of the latest and greatest Cinema technology. I only wonder how long it will take us to transition to 4K. We’re not in a rush, and don’t think anybody is that eager to see my face in 4K.