Celebrating and Comparing VFX Innovations From The Star Wars Movies 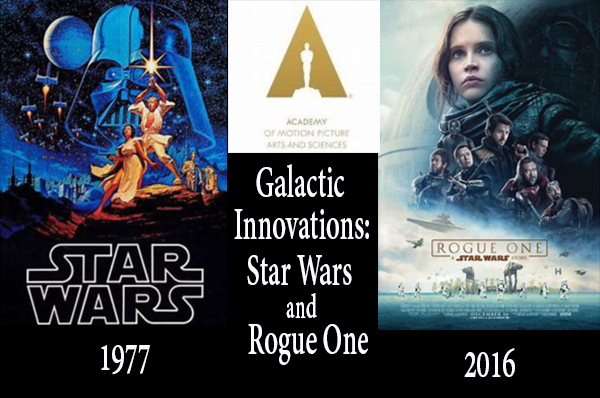 While the Digital Cinema Society has never advocated for digital acquisition or post methodologies over film, we have been a witness to a sea change in the way movies are made, distributed and exhibited.  Celluloid capture is now a boutique business and exhibition on film is all but nonexistent.  There may be no better example to compare these differing approaches than to analyze two of the many features in the Star Wars franchise, one that followed an analog path to the screen, and the other digital.

I consider myself extremely lucky to have had the chance to attend an epic educational event put on by the Science and Technology Council of the Academy of Motion Picture Arts and Sciences.  The event entitled “Galactic Innovations: STAR WARS and ROGUE ONE,” was held on June 27th at the Academy’s Samuel Goldwyn Theater.  With an amazing group of presenters who actually worked on at least one of these movies, (some on both,) a clear contrast was drawn between the analog technologies developed for the first STAR WARS released in 1977 with the all-digital toolsets used to create ROGUE ONE released in 2016. 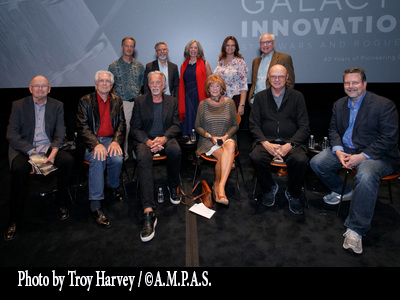 I’m proud to say that several longtime DCS members were integral to organizing the event including Rob Hummel, President of storage technology company, Group 47, and Chair of the Public Programs and Education arm of the Science and Technology Council, as well as Joe DiGennaro, who is a Research Technologist on the staff of the Sci-Tech Council. 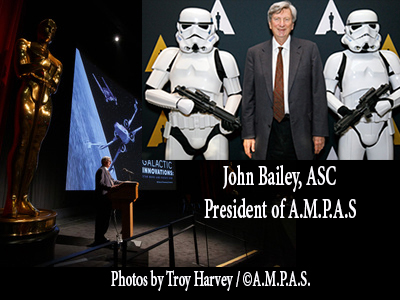 The audience was warmed up with a behind-the-scenes/gag reel from the very early days of ILM circa late 1970s.  It featured many of our presenters clowning around and blowing off steam in what looked to be a demanding, yet fun place to work.  Then, after he was escorted in with much fanfare by two fully outfitted Storm Troopers, the official program started with a few words of welcome from Academy President, John Bailey, ASC.  Richard Edlund then quickly got things going discussing what he credited for really starting a revolution in visual effects, the “Dykstraflex” motion control camera.  The VistaVision film camera and boom arm, which was built to shoot miniatures for the first Star Wars movie, and has since been donated by George Lucas to the Academy museum, could be seen on display in the lobby after the event. 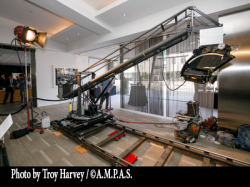 Prior to this innovation, miniatures were animated by using successive still frames and moving the models ever so slightly between each frame.  Besides being extremely laborious, another problem was the issue of stutter, as demonstrated by clips that were shown of Ray Harryhausen’s work on the Sinbad films from the late 1950s.  According to Edlund, motion blur was the vital secret that made the Star Wars shots of the spacecraft so believable as they appeared to fly by the camera.  His emphasis on motion blur got me thinking about how essential it is to achieving a cinematic look and the subsequent suspension of disbelief that is so necessary in visual storytelling.  (In my experience, it is the motion blur created by having a shutter open at least 180 degrees that really makes cinematic magic.  It is a much more critical ingredient to the recipe than shooting at 24fps….But I digress.) 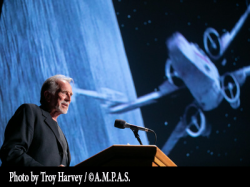 John Dykstra then took to the podium and explained that they were constrained by photography in the physical world, in other words, they had to put real objects in front of the camera and photograph them, (and real explosions!)  Both the camera and objects were dynamically moving in nonlinear paths and the system was able to create precisely repeatable multiple takes necessary to add all the elements to each shot.  Some complicated shots required over 50 passes through the optical printer.

Miniatures were photographed at slow frame rates to make them appear to be quickly moving and extremely long exposures were necessary in order to stop down and achieve believable depth of field; (f16 was a common f-stop).  The 8-perf VistaVision format was selected to minimize the degradation that occurred when duplicating to add layers.  However, such a large format created an additional challenge, as is still the case today, a dearth of lenses capable of covering such a large image area.

The far-reaching changes that led to the current state of Digital Cinema production, post, and exhibition occurred thanks to the ambitious pioneering effort of many filmmakers, exhibitors and technologists.  However, among this particular group, and the movies they had a hand in creating, are many milestones along the journey.  One man, even though he was not physically present in the room, is responsible for contributing to so many enormous innovations that have developed over the last couple of decades, I’m referring to George Lucas.

Not only was Lucas’ 1999 Star Wars Episode I: The Phantom Menace one of the first major features to include electronically acquired footage, it was among the first motion pictures to be screened digitally before paying audiences, helping to further shepherd in the transition from celluloid to digital.  Although much of the movie was acquired on film, the digital footage he shot blended seamlessly, and he announced later that year that he would acquire future sequels digitally, (at that time, hi-def digital video.)

Lucas then reached out to Sony to incorporate 24 frame per second capture, (the standard for broadcast video had been 30fps).  In June 2000, Star Wars: Episode II – Attack of the Clones began principal photography shot almost entirely using a Sony HDW-F900.  All the while, he was also pioneering nonlinear electronic editing with the EditDroid system which was developed in the 1980’s in cooperation with Convergence and eventually sold to Avid Technologies.

As explained in an interview George Lucas gave us in 2001 for our documentary, Digital Cinema Solutions, (the precursor to the Digital Cinema Society),“We spent a great deal of money on research and development and tried to push the medium forward to make the process of making films easier for the artist, because I wanted to make it easier for myself, to cut the films, to shoot the films.  Advancing the technology forward a little here, a little there, does just that.  It cuts costs and makes it easier for the artist to realize their vision”.

Although his contributions to shooting, editing, and distributing movies digitally were ground breaking, the most notable advancements Lucas helped to spur may have been in the area of visual effects.  The team assembled with the help of John Dykstra not only helped to innovate analog methods, but were also there at the genesis of computer generated imagery.  Industrial Light & Magic was quietly shepherding the evolution of digital effects with innovations such as the liquid-metal T-1000 of Terminator 2 (1991) and the amazingly lifelike dinosaurs of Jurassic Park (1993).

Longtime, and now former Creative Director of ILM, Dennis Murren has collected 8 Oscars.  Although several are for his work on Star Wars features, they also include recognition for his work on ET, the Extra-Terrestrial, Indiana Jones and the Temple of Doom, The Abyss, Terminator 2: Judgment Day, and Jurassic Park.  The current Chief Creative Officer at ILM, John Knoll, although not around at the formation of ILM, received a Scientific and Technical Award from the Academy, along with his brother, Thomas, for the original architecture, design, and development of Adobe Photoshop, the kind of technology at the heart of modern computer generated VFX.  Their collective experience is broad, which was credited by John Dykstra, along with their ability to collaborate, for the great success of ILM over the years.

Many of the original team were friends and had been working together at Douglas Trumbull’s pioneering L.A. area visual effects shop, (including Douglas’ own father, Don Trumbull,) who all joined the original Star Wars VFX team.  Although Douglas didn’t contribute directly to Star Wars, his DNA is all over the effort, and he deserves recognition as another standout in the history of modern visual effects.  He contributed to, or was responsible for, the special photographic effects of 2001: A Space Odyssey, Close Encounters of the Third Kind, Star Trek: The Motion Picture, Blade Runner and The Tree of Life.  We are proud to call him a longtime member of the Digital Cinema Society. 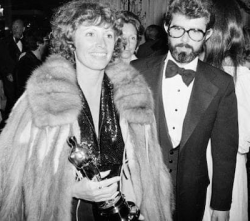 It was especially nice to see Marcia Lucas recognized at the event for her significant contributions.  Along with her former husband, she was there from the beginning, but she didn’t just ride on his coattails.  By the time she met George, a student at USC, Marcia was already working in the late 1960’s as an Editor under the tutelage of the legendary Verna Fields, ACE, who won an Oscar for Stephen Spielberg’s Jaws.  Although she did edit several George Lucas films, such as American Graffiti and won an Academy Award in 1977 for the first Star Wars, she may be best known for the films she cut for Martin Scorsese including Taxi Driver, Alice Doesn’t Live Here Anymore, and New York, New York. 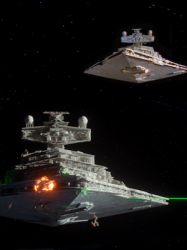 When the evening’s discussion got around to comparing the technology that was used on Rogue One, multiple Oscar winning Optical Compositing expert, Bruce Nicholson took over the presentation.  He worked on both the original Star Wars and Rogue One as well as many other notable features such as Raiders of the Lost Ark, Field of Dreams, and Ghost.  He explained that a lot of the problems associated with film originated VFX were no longer a factor with the digital compositing on Rogue One.  On the first Star Wars, adding separation layers to create composites, sometimes as many as 50, were necessary to complete the shot, and if there was a problem with any of them, the whole process would likely have to start anew.

By the time Rogue One was being made, on the other hand, no blue screen was required to add elements since they were computer generated.  So, there was no degradation resulting from film duplication and there was greater color control.  In fact, it was pointed out, modern VFX integration has been greatly improved thanks to ACES, (Academy Color Encoding System), a color space and set of encoding specifications to insure every step in the color management chain maintains the artistic intent of the filmmakers.  ACES is another of the many efforts put forth by the Academy’s Sci-Tech Council who were also responsible for programming this Star Wars retrospective event.

In addition, lining up elements has been greatly assisted by the use of computerized tracking and virtual cameras that can match move.  CGI backgrounds can now move in relation to a virtual camera based on camera/lens metadata fed into the computer.  The Director of Rogue One, Gareth Edwards was in the audience and behind the scenes footage demonstrated how he would operate the virtual camera, which was created from gaming controls, while in his studio office.  Rachel Rose, the Computer Scientist at ILM, (she actually holds a Ph.D in the subject,) explained how this allowed the Director to perfect the extemporaneous feeling movement he was looking for.  All these tools allowed for much greater creative freedom, plus the time to finesse in order to better integrate the images with the live action. 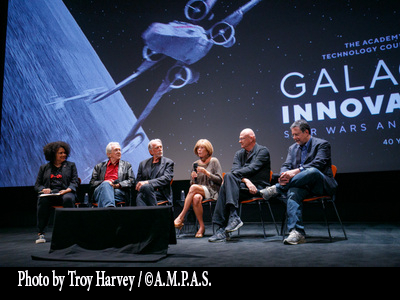 There were also presentations on sound effects editing, model making, and more after which the evening was wrapped up with a rousing panel discussion.  The event was also live streamed, but doesn’t seem to still be online.  I feel very fortunate to have had the chance to attend, and am sorry for those of you who missed it.  It was extremely memorable.  My sincere thanks to the filmmaking legends who shared their insights, the A.M.P.A.S., and the Sci-Tech Council who produced this great event.