The Longterm Measure of Success – A Follow Up on the Indie Feature: BRAKE

I’ve shot several dozen movies over the last few decades, most you’ve probably never heard of.  In fact, very few ever saw the light of a domestic theatrical screen, yet many did manage to make a significant profit from what is loosely called the home market.  One such movie is called “BRAKE,” which I shot over five years ago and would now like to offer up as an Indie success story.  After quickly turning a profit on its initial $500K budget, it is still providing an income stream to its Producers.

A team of three came together, blending their diverse talents to produce “BRAKE”. They included the film’s Director/Producer, Gabe Torres, a veteran filmmaker with several features and numerous narrative television credits to his name.  I’ve been lucky to have served as his DP on many of these projects over the last 20 plus years we’ve been working together. Also assuming producing duties was Nathan West, an Actor and Singer who was ready to turn his sites to behind-the-camera pursuits, as well as James Walker, who came from the world of finance and production company management.

The first step on the road to filmic success was finding the right story that could be accomplished well on a limited budget.  In this case, a script written by newcomer, Timothy Mannion, which features a single character trapped in the trunk of a car for practically the whole movie.  They then cast Stephen Dorff, who will be starring in the next installment of HBO’s “True Detective” and is also well known for titles such as “Somewhere”, “Immortals”, “Public Enemies”, etc.

A star of that caliber might eat up most, or all, of a $500K budget, but as an old friend of the Director, Gabe Torres, he was accessible.  With the title of Executive Producer we can only assume Dorff shared some profit participation, which in this case probably turned out to be a smart bet.

He may also have been attracted to the opportunity to star in a virtual one-man showcase, appearing solo in more than 90% of the movie.  What Actor can turn that down?  A few other name Actors came in for a day or two to capture the final sequence, including Tom Berenger, JR Bourne, and Chyler Leigh of “Grey’s Anatomy” and “Supergirl” fame, (who also happened to be married to one of the producers, Nathan West).

The next smart move these guys made was to hire an extremely talented Production Designer, John Mott, who has gone on to design the popular TV series “12 Monkeys” and “The Americans”, as well as a host of higher budgeted Indie features. 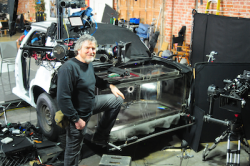 He came up with several great techniques to allow movement within the confines of the trunk, which was particularly important with so much action taking place there.  A real car trunk was deconstructed with removable panels to allow a variety of camera angles, and then placed on a gimbal so that it could be rocked, at times very violently, to simulate the motion of the vehicle.

All the while, the audience is only experiencing what the character is, and never sees outside, relying only on lighting, camera movement, and sound design cues to sell the action, even during a high-speed chase.  Although it created a lot of lighting and reflection challenges, (especially with simultaneous two camera coverage),

I was probably lucky that the script called for the character to be also trapped inside of a plexiglass box.  Being transparent, it allowed for lots of interesting angles and camera moves.  But the real beauty of setting so much of the movie in such a confined space was that it became so produceable.  The whole movie was shot within a two week schedule with only one location move outside the small garage that housed the car trunk “set”.

With a little help from some other of the Producers’ friends, Post was also handled quite smartly.  Sam Restivo, an up and coming Editor, was a protege of their friend Bryan Carroll.  Carroll is a Producer/Director of his own features, who is also credited as Co-Producer on several of Michael Mann’s movies including “Collateral”, “Public Enemies”, and “Miami Vice”.  He not only identified Restivo as a rising star, who turned out to be a great choice, but also helped secure fantastic deals with his strong contacts at high-end Post facilities.  Having the talents of someone like Damian McDonnell, the same Colorist who had timed Peter Jackson’s “Lord of the Rings” trilogy was pretty impressive for a $500K Indie feature.

Another star that most low budget movies could never afford was Composer Brian Tyler, (“Iron Man 3”, “Avengers: Age of Ultron”, “Fast and Furious”, etc.).  Our Director, Gabe Torres, gave him his first feature assignment on a little movie called “Bartender” back in 1997, and he apparently hasn’t forgotten the favor.  He is now one of the top Composers in the Industry, and created a stirring soundtrack, which was essential to keep the roller coaster on track and the action moving forward.

I’ve worked on several other promising low budget features that were also smartly produced and posted and should have been punching far above their budget class.  However, many Indie filmmakers who get to this point feel as though they have crossed the finish line and the marathon is complete.  They forget about one of the most important aspects of achieving success, which is navigating the tricky waters of distribution.

Some such movies are dragged around the festival circuit for years getting over exposed to the point that their value is diminished.  Even movies that manage to get into major film festivals, such as Sundance, are not guaranteed distribution, and once you’ve premiered your work at one major festival, the others will often turn you down since they all want to be the first to show a promising film and none want to be the second.

Distribution is an area that was well researched by the filmmakers responsible for “BRAKE”.  In fact, one of the Producers, James Walker, became so immersed in this end of the Industry that he ended up running his own distribution venture.  He formed an investment group to acquire Lightning Entertainment after getting acquainted with the firm when they took the international rights to “BRAKE”.  Having now become an expert in the field, James had a number of pointers to offer other Filmmakers when I interviewed him for this essay.

James cautions filmmakers to slow down and find the right team to handle their movie.  In the case of “BRAKE”, they worked with a Producer’s Rep known as Traction Media.  Instead of the festival circuit, the Rep set up select screenings for companies she knew would be a good fit.   IFC won the domestic rights with Lightning Entertainment picking up the international, essentially sending the movie on its way into profit right out of the gate.

Walker also recommends reaching out to potential Reps and Distribution companies early.  It doesn’t hurt to get on their radar, and they may be able to offer guidance on what elements will make your project most salable in various markets.  For example, what is the value of your “name” talent?  Can adding a particular actor and the fees they demand be justified by potential returns?  Remember that the market is in constant flux, and these distribution professionals make it their business to keep current.

An extremely small theatrical release was arranged for “BRAKE”, more as a prelude to promote the home and foreign distribution, as well as having the opportunity garner reviews, (which were mostly positive).  It is the home video market where small pictures like this can enjoy the greatest success.  Outfits like Netflix, HBO, Showtime, and Cinemax, can be a major source of income for the Indie Producer, and although they don’t provide the revenue they once did, there is also “packaged media”.  It wasn’t so long ago that Discs, (and prior to that, VHS tapes) were available through the likes of Blockbuster, Redbox, and big retailers like Walmart.

“BRAKE” was in fact the number one rental on Redbox for a couple of weeks, and is still making the rounds on Showtime, having been renewed several times.  Although it may never have appeared at your local cineplex, “BRAKE” is an unqualified success.  It has probably been seen by millions and made a healthy return for its investors.  In summary, the takeaways others might apply to their future projects include: