Keeping Up With The Clairmonts — Confessions of a Gear Addict by James Mathers, May 2013

Keeping Up With The Clairmonts — Confessions of a Gear Addict

Having survived NAB, I’m now buckling my safety straps in preparation for Cine Gear and IBC, trying to prepare myself for the continuous onslaught of new gear coming our way. I sometimes have trouble deciding if the rapid pace of technological advance is a blessing or a curse…perhaps it is both. This is not only about my mission to keep you all informed, (which I thoroughly enjoy,) but also as an equipment owner attempting to stay current on technology without breaking the bank. Clients always want the latest and greatest, but these days they are more reticent to pay for it; they expect Champagne on a beer budget, and investing in gear gets a little more tricky every day.

Although prices are dropping, it is difficult to remain financially viable and amortize these investments given the gear’s ever shortening life cycle. The culprit might seem to be obsolescence, but I would say it is more accurate to call it perceived obsolescence, because there are packages that are still capable of creating great images, but the aura of their cutting edge has dulled, and they are no longer considered “state of the art.” For example, there are plenty of great 2/3″ cameras from Panasonic or Sony out there that are still capable of capturing great HD images. Even if you’re over tape, many have the capability to output a signal that can be fed into a hard disk digital recorder to achieve a less compressed 4:4:4 10 bit signal. While it wouldn’t be my first choice for a dramatic feature, cameras like these are really a much better solution for many documentary type projects destined for broadcast. Yet those type of shows are increasingly shot with large sensor cameras, sometimes at the expense of maintaining sharp focus. And don’t get me started in regard to shooting everything in 4K, 5K, and beyond. I believe many projects can benefit from acquiring at higher resolutions, but the corporate web video in 5K?

A little knowledge can be a dangerous thing, and a challenge is that clients tend to hear about new technology before it is actually available and practical. A Producer recently demanded I use the Dragon sensor, even though the upgrade is not available yet, (not to mention that he wanted to pay less than the last time we used the Epic with the original sensor.) Needless to say, he ended up going elsewhere, but honestly, I wasn’t disappointed; I have little patience for Producers who would choose a DP simply because of a camera he might be able to provide. It only makes sense when the best Cinematographer for any given project is sought out first, and then with their input, the proper format and camera can be selected. However, when the people doing the hiring get an ear full of Buzz, things don’t always work out as they should.

I don’t blame the Manufacturers; with the ever-increasing speed of product release schedules, they are forced to get the word out early just to stay in front of the curve. They need to wet our appetites and gauge interest for their products to decide how many units to produce. Guessing poorly either way can be disastrous for them. Hence they are criticized with taunting acronyms such as SONY: “Soon Only Not Yet,” RED: “Ready Except Delivery,” and BMCC: “Better Movie Camera Coming.”

It has become the norm to announce, and even take deposits for the sale of Digital Cinema technology well before it is ready for delivery. In a recent post on REDuser, Jim Jannard owned up to some of the criticism his company gets in this regard:  “So… are we late with Dragon? Yes. And Meizler. And REDRAY. And our Projector. Of course we are. This stuff is not easy. In fact it is groundbreaking and extremely difficult. Sometimes I want to strangle our engineers for their optimistic schedule. In the end… I embrace them for working on the hardest stuff… the impossible goals. They are the ones that brought you the RED ONE and the EPIC.” He went on to tease, “We have dreams that cannot be imagined. Once we deliver what you know about… there is more. Much more… only this time, we aren’t going to tell you until they are done.”

I have to say that the sometimes overwhelming march of technology has me occasionally yearning for the “good old days” when a camera’s life was counted in decades rather than months. Allow me now a little nostalgia as I recall and comment on some of the trusty cameras I’ve used over the years. 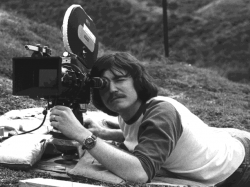 My first pro assignment as a Cinematographer,back in the 1970’s had me behind an ARRI 16BL, (pictured).  The small production company where I worked also owned a newer Eclair NPR, but the Boss was usually on that camera and I was on the ARRI, which already had many years and miles on it, but is probably still, to this day, capable of capturing good images.  And I should point out that even though we used two very different makes and models of camera, they were very compatible, still capturing the same 16mm format. 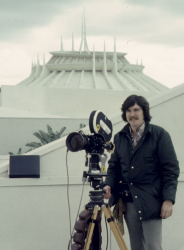 For 35mm jobs we would rent an ARRI, (like the IIC I’m using here on a 1970s era Disneyland commercial,) or a Mitchell if we needed better registration or higher speeds.  When I started my little production company a few years later, my first investment was in an ARRI SR16, which had just come on the market. It was an ergonomic dream compared to the 16BL and a lot more reliable than the Eclair.

I continued to use that camera for 20 years, but also had the good fortune to invest in an Ikegami HL79, which had a remarkable life span for an electronic camera; even though the recording formats continued to change, (pictured here with me is Recordist John Lifavi hefting a 3/4″ tape deck around.) 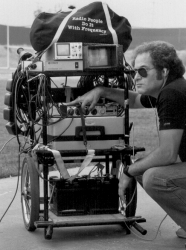 The “Iky” was the camera to have, and that lasted for at least 5 years, but from 3/4″ we went to the somewhat less portable, but higher quality 1″ Type C recorder, (again pictured with John Lifavi). Note the car battery on the base of the cart, which was the only reliable way of powering the unit on location.  The Ikegami was still producing great Standard Def images when I sold it, although it had been made somewhat obsolete by the Sony Betacam, which was the first popular camcorder combining a broadcast VTR into a shoulder-mount camera. I was ready to exit the video business anyway, and used the proceeds from the Ikegami sale to get into a feature film camera package which better suited the projects I was interested in shooting. 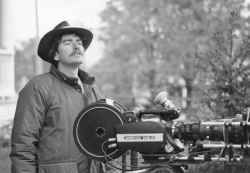 I was able to come up with an ARRI 35BL3 package, (pictured) which I purchased from a retiring DP who had already used it to shoot a long running TV series. Over the next decade I shot over twenty Indie features with it before selling it to one of my Camera Assistants, Bryan Godwin, who went on to amass a huge camera inventory for the very successful L.A. area rental company, Wooden Nickel, which now specializes in Grip and Lighting. 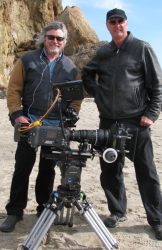 I think Bryan still has our old BL3, and I’m sure it’s still quite capable; just load a magazine with the latest emulsion and you’re shooting state of the art images.  I’m really surprised at the low prices these older cameras are commanding in the used market, a couple of thousand dollars instead of the couple of HUNDRED Thousand they fetched when new.  My friend Bill Bennett, ASC recently speculated that a low budget Filmmaker might buy one of these, and even given the cost of film stock and processing, shoot a project, then drop the camera in the ocean after wrap, and still come out ahead, compared to investing in the highest quality Digital Cinema Camera and its accouterments.  (Bill, pictured here with one of his Alexas, also owns several ARRI film cameras.) 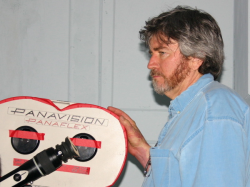 In any case, in the mid-90’s I decided to get out of the equipment business for a number of years, and had the good fortune to shoot several series and a couple of features with Panavision cameras; (pictured), as well as Aaton and ARRIs. 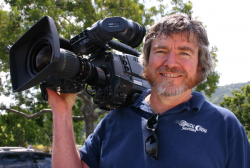 I jumped back into owning cameras with the release of the Varicam, (pictured.) Panasonic had been kind enough to loan us one to shoot our documentary Digital Cinema Solutions, (which led to the birth of DCS.) When I was hired to shoot the feature documentary, “US vs. John Lennon” I knew it would serve me well, and went on use it on a number of projects, including a couple of Indie features. 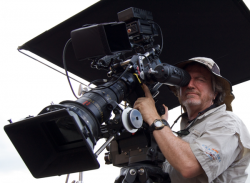 Having found out about the RED One when I was hired to shoot some early tests of the technology, I was one of the first customers. The chance to use the same 35mm format film lenses I was used to, and RAW recording, offering more latitude during production to color correct later, was more akin to shooting negative and made it an easier transition for me from film for narrative productions. I used the RED One, (pictured) on several features and a couple of TV series, and was happy to upgrade to the MX sensor and then to the Epic, which I still have today.

I’ve had a good run with RED; the cameras have served me well. I have no reason to complain, but I’m now debating whether to upgrade to the Dragon sensor.  More often than not lately, I’ve been shooting with gear supplied by the production, including cameras from Canon, ARRI, and Sony.  They are all great solutions that only keep getting better and better.  The only challenge is maintaining a working familiarity with so many different models, but the manufacturers have been good about making training available.

The end result has been that the Epic has been locked in the equipment closet, and I’m not keen to spend $10K on an upgrade to a new sensor when it  hasn’t been earning any rental income.  I’m also concerned that I will not be able to take advantage of the most this new Dragon sensor has to offer because my current stock of lenses will not cover the ever-expanding image area.  I’ve got a significant investment in top quality Cine Lenses that I can use with any number of Digital Cinema or 35mm Film cameras.  So, I’ll keep my lenses, but perhaps it’s time to get out of the camera ownership model once again.  That way, no matter what I might have on hand, I can select the best tool for any given job, and let the rental companies worry about keeping up with the latest gear.  Anybody want a lightly used Epic?…Make me an offer.