It’s Not The Size…It’s How You Use it: The Digital Cinema Camera Sensor

Does size matter?  It certainly does when you’re talking about camera sensors, but the more important question is how they will be used.  A great number of new Digital Cinema cameras are now being released and they feature a wide variety of sensor sizes.  Look no further than this month’s, (February 2018),  DCS eNewsletter for reports on new cameras from ARRI, Sony, Panavision, Panasonic, Blackmagic Design, Canon, and Fujifilm, all with slightly differing sensor schemes.

First a brief history of motion picture sensor sizes.  With only a very few exceptions such as IMAX and Vista Vision, the 35mm format was the standard of the motion picture industry for over a hundred years.  A complete architecture of film stocks, cameras, and lenses was built around this size, including formats in 4×3, (1.33:1), 1.85:1 and anamorphic 2.39:1, etc. 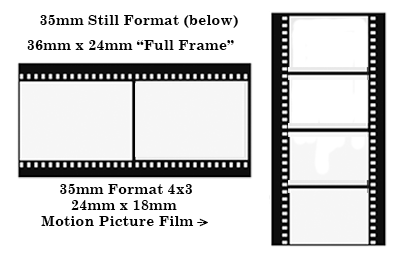 Meanwhile, 35mm film also became popular in still photography, but even though the film stock shared the same dimensions, the frame size, or area of exposure on the film, was much greater.  This is due to the way the film traveled through the gate, vertically in motion photography and horizontally in still photography.

Larger formats such as 2¼” x 2¼” known as “medium format” were also used for higher end commercial photography, but 35mm was the de facto SLR standard.  A second smaller 16mm size motion picture film also developed to accommodate more portable cameras that were also a little stingier with film consumption.  Not only is the film half the diameter, but at the same frame rate, it will go through the camera more slowly.  At 40 frames per foot, 16mm running at 24fps will travel through the gate at 36 feet per minute compared to 4 perf 35mm film which only fits 16 frames into each foot and runs at 90 feet per minute.

Although film consumption was never an issue, modern video sensors were developed in a size closer to 16mm film, with ⅔” sensors, (usually as a 3 sensor system with a color separating prism in line before the sensor block).

Sensors and film gate sizes remained relatively stable for many years until the development of digital still cameras.  Higher end DSLRs maintained the full frame 35mm used by still cameras, while others started to show up in a size matching the smaller frame used by 35mm motion picture cameras, sometimes referred to as “four-thirds, or APS-C.”

Meanwhile, as electronics improved, consumer and prosumer camcorders started shrinking their sensors to whatever they could get away with; ⅓”, ¼”, or even smaller.  Initially, these cameras only produced standard definition, but soon started to achieve HD and beyond.  The technology has now evolved to the point that my iPhone 6 takes beautiful 4K stills and video with a ⅓” sensor.

While sensors don’t necessarily have to be large to attain higher resolution, it makes it somewhat easier to also maintain good sensitivity and dynamic range.  It can be challenging to get good images when cramming too many photo sites onto the head of a proverbial pin.  I think another more motivating factor pushing manufacturers to build sensors in excess of S35 into their Digital Cinema cameras is the ability to achieve very shallow depth of field.

Given the same field of view, the larger the sensor, the less depth of field.  When DSLRs started gaining the ability to shoot video, Indie filmmakers found that they could get nice looking HD images from relatively inexpensive cameras, using their legacy still lenses.  They were usually shooting with minimal lighting at as wide an aperture as they could, resulting in razor thin depth of field, which started to get popular as a visual style.

Personally, I’ve never been a fan of shooting motion pictures with DSLRs, preferring purpose built movie cameras for those jobs, and I really hate all the soft focus that seems to have come as a result, but that’s just me.  The ability to isolate a subject from the background with limited depth of field is certainly an important directorial tool, even if it may be a little overused these days. 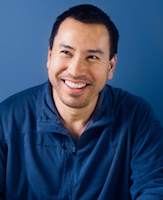 However, the appeal of larger formats is about more than shallow depth of field.  Panavision’s VP of Optical Engineering, Dan Sasaki explains, “As cinematographers migrate to larger sensors, they need to use a longer focal length to get the same field of view. What this does is create a psychological feeling that is closer to how we perceive things. This is part of the beauty of large format cinematography, a concept realized by photographers for ages. Because you are using a longer lens, your compression, your depth of field, and your perspective magnification is more natural. It actually draws you in. Your mind is not questioning, because what you see is closer to how things really look…everything looks more natural. Magnification looks proportionate.”

As with everything photographic, there are trade offs with growing the sensor size.  Although it is easier to collect more light with more and larger photo sights spread over a greater area, the physics of the lenses needed to cover the larger image circle limit their ability to achieve wider apertures.  Another physical aspect of lensing for larger sensors is that the lenses need to be physically larger.  This might not be an issue for a prime, or a zoom with only a very limited range, but start building lenses with more than a 3 to 1 zoom ratio and they get very large and bulky in a big hurry.

Zoom range is probably what is motivating Panasonic and Blackmagic Design to both create new cameras able to work with B4 lenses originally conceived to cover three chip 2/3” sensors.  These lenses were very popular with broadcasters and documentarians.  A lens with more than a 10 to 1 zoom ratio could still be easily handheld for field production and telephoto big box lenses with reasonable T-stops can achieve ratios of 100 to 1.

These users now feel the need to upgrade to 4K, but they don’t want to give up their beloved B4 mount glass.  Besides zoom range, the narrow depth of field filmmakers love about large sensors is an issue for broadcasters and documentarians.  However, single sensor image technology has improved to the point where they surpass the three 2/3” sensor array that the B4 mount was designed to work with.  From what I understand, the new Panasonic and Blackmagic cameras both use larger single sensors and are scaled down to work with the B4 mount’s 2/3” coverage area.  They take a hit in exposure, but are still able to offer better sensitivity and dynamic range by taking advantage of improved processing.

Both Fujinon and Canon have developed full lines of higher quality B4 lenses better able to capture the increased resolution of 4K, but frankly, many broadcasters will be slapping their old HD lenses on new 4K cameras and calling it UHD.  Although the images will not have the same MTF as with the newer and significantly costlier lenses designed for 4K, using legacy glass will allow them to more easily make the transition to higher resolutions.

I feel that the ability to use the same Super35 motion picture lenses extant in the market, or still camera glass with the optional EF mount, had a lot to do with the early success of the RED Digital Cinema Camera. Cinematographers with a film background could use the lenses they were accustomed to, and Indie Filmmakers could scrounge up lenses from their still cameras to make their movies by any means necessary. 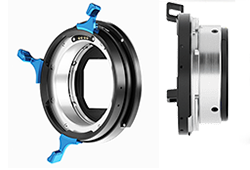 Since lenses have a much longer shelf life than cameras these days, owners want to make sure they can amortize their significant investment in them.  This is why I think ARRI and Sony are smart to make sure their new Alexa LF and Venice cameras, although designed to work with lenses covering much larger image areas, still work well with standard PL lenses.  Although ARRI has announced a complete new line of 16 large-format ARRI Signature Prime lenses, ranging from 12mm to 280mm and fitted with the ARRI LPL mount, the Alexa LF is full compatibility with existing PL mount lenses via a PL-to-LPL adapter.

No discussion of sensor sizes would be complete without mention of the granddaddy of Digital Cinema sensors featured in the Panavision Millennium DXL and RED Monstro 8K VV.  It is a whopping 40.96mm x 21.60mm, recording motion picture images up to 8K 8192 x 4320. 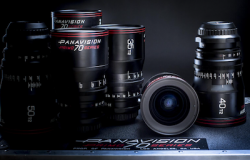 Knowing that there were not too many legacy lenses around to cover such a large image circle, Panavision got to work restoring some of its older glass left over from the 70mm film days, but also set out to design a whole new line of the most modern of lenses.  They call them the PRIMO 70 series and they are compatible with digital cameras equipped with the Panavision 70 mount system such as the DXL.  Surprisingly, the new Primos have a form factor very close to their predecessors in so far as size and weight; and they are fast too, most with a maximum aperture of t2.0.

There are certainly advantages that can come with the new larger sensors, but they are not right for every job.  While broadcasters and documentarians need the smaller form factor, extended zoom ratios, and expanded depth of field of 2/3” format sensors, the less compromising feature Cinematographers will demand large format.  Happily in the middle will be the vast array of 35mm format cameras and lenses where I have comfortably worked for many decades.

So, that’s why I say, it’s not the size of the sensor that’s important, but how you plan to use it.