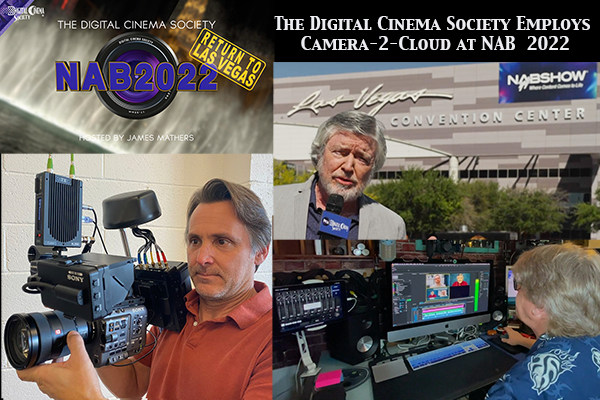 NAB 2022 marked a return for the industry and for the Digital Cinema Society to some of our cherished traditions at the same time that it created an opportunity to break new technological ground.  After the shuttering of trade shows around the globe including NAB 2020 and 2021, it was great to be back doing what DCS had been for nearly two decades, covering what’s new in technology for those who are unable to make it in person to the shows.

The Covid Pandemic is a worldwide disaster of epic proportion.  Many lives have been lost and businesses destroyed, so it is hard to see how any good might have come from it, but sometimes such disruption and the desperation of trying circumstances can lead to technological advancement.  There are certainly medical breakthroughs that will continue to be born out of our fight to contain the virus, but there are also advancements in motion picture technology spurred by the necessity to deal with the pandemic; let me explain…

I’ll start with a previous example in our industry.  We used to record high-end digital on the industry standard of the time, Sony HDcam SR tape.  However, when a major earthquake and tsunami hit Fukushima Japan in March of 2011, the nearby Sony factory was knocked offline.  Almost overnight, our industry adapted and we started having to trust our original recordings and backups to disc.

It was not that recording to disc was not already in existence, but the desperation of that time drove the acceptance of the technology; we really didn’t have much choice.  Fast forward to 2020 and the pandemic lockdowns that followed.  Suddenly, it was near impossible for productions to safely go on location.  Enter Virtual Production techniques and shooting in front of volumes.  The technology was already there, but it was suddenly much more appealing.

Even shooting on stages was challenging, and the number of people had to be limited.  Enter remote workflows, and the ability to keep creative collaborators off the set, instead interacting over the web.  These developing techniques were not just a convenience any longer, but at many times indispensable.  The advancements came quickly and systems were developed to more seamlessly bring the motion picture set and post together leading to the marriage we call “Camera-2-Cloud”.

Perhaps no one is more responsible for the rapid advancement of “C2C” than Michael Cioni.  As a Founder of Light Iron, a workflow-centric post production company, he pushed to bridge the gap between the set and post with their “Outpost” system.  This brought on-set color and dailies from the lab to the set.  I believe that this is part of what caught the eye of Panavision and led to their acquisition of Light Iron in 2015.  Cioni was made their Senior VP of Innovation where he led the development of their Millennium DXL camera system.  Throughout this development, Michael was keenly aware of the benefits of integrating wireless technology and worked with industry partners such as Teradek. 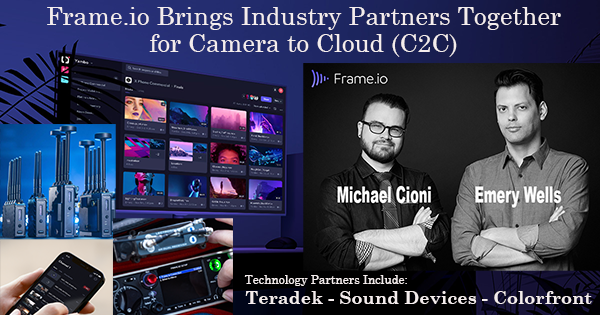 Meanwhile, a company called Frame.io, founded by Michael’s friend Emery Wells, was busy innovating collaborative workflows for post production and subsequently brought Cioni onboard to help bring the pieces together to further develop Camera-2-Cloud.  The first iteration was designed to acquire at the highest possible quality recording to the camera, while simultaneously recording and uploading a lower bandwidth proxy to the web so the post production process could begin immediately.

High-end digital cinema cameras from Panavision, ARRI, and Sony were set up so that as soon as the camera cut, a Teradek Cube would start to upload the footage to the cloud.  This allowed key creatives and post services to instantly access and interact with the footage from anywhere in the world.  The higher bandwidth master files could follow in time and be conformed at a later stage of post production saving crucial time in the creative process both in production and post.

Several major motion pictures took advantage of these systems, raising Frame.io’s stature within the industry, and it was not long before the company was acquired by Adobe. This brought not only seamless integration with Adobe software such as Premiere, and After Effects, but also the power of an international heavy hitting technology giant into the mix allowing Cioni to continue leading the charge for Camera-2-Cloud.  Frame.io, including Camera-2-Cloud, is now included at no additional charge with every Adobe Creative Cloud subscription.

Practicing what we preach, the Digital Cinema Society decided to put these technologies to the test by producing our streaming booth tour interviews at NAB 2022 using Camera-2-Cloud workflows.  When we first started covering trade shows in the very early two-thousands we were shooting standard def and would take the tapes home with us at the end of the week, digitize them, and a week or two later would have cut some coverage to stream from our website.  It showed on what now seems like a postage stamp sized media player which was all that most internet connections could handle without massive buffering.

In a technology environment that was changing as quickly as ours, a couple of weeks to find out what’s new was just too long.  Over the next few years, we upped our game and started shooting HD on mini DV tapes but we were still challenged to edit and process the tapes for streaming, even though we only had a handful of interviews in those early days of DCS. 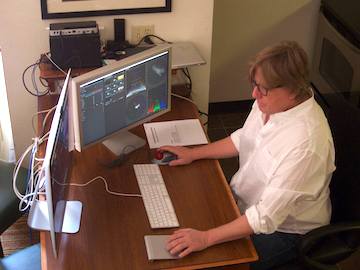 We eventually started to bring our Editor, Christopher Knell, along on the trip to Vegas to cover NAB and he set up an editing suite in a hotel room across the street from the Convention Center.  We would ferry the tapes, and later the media cards, to him to be edited for streaming within about a day’s time.  After a while, we cut that down to several hours from shooting the interview to streaming it on the web, and with the help of streaming services such as Vimeo we were able to reach an international audience streaming at HD resolution.  This was pretty much the status quo for several years, recording in HD and later 4K, but finishing in HD to stream, usually within 24 hours. 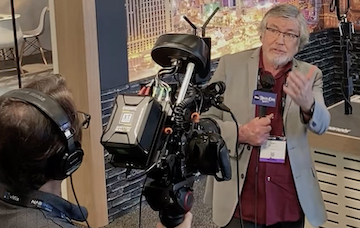 Enter Camera-2-Cloud and technology from Adobe, Frame.io, Teradek, and Sony, which helped us deliver our 2022 coverage in record time so that those who could not attend NAB in person could still quickly find out what was new at the show.  As soon as our Cinematographer, Cameron Cannon, cut the camera, it would start uploading to the Frame.io website and our Editor would have access to the file in his Adobe Premiere timeline within minutes. 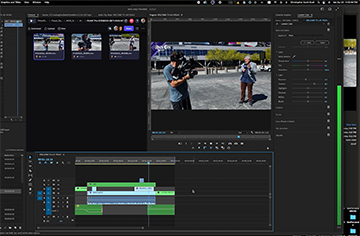 Importantly, he could quickly QC the footage and confirm we could move onto the next interview.  It would have saved us great pain had we had this ability a few years back when one of our SD cards failed and we lost several interviews that we had to try and reshoot while still keeping our very tight schedule.  The ability to access, QC, and approve the edited pieces via Frame.io was also crucial since our Editor was working so quickly, making it easy to miss issues like the spelling of names in the lower thirds.  Once the video was approved by our Associate Editor, Sylvana Zuniga, who was also working remotely at her home in L.A., the finished piece could be published to Vimeo directly from the Frame.io server. 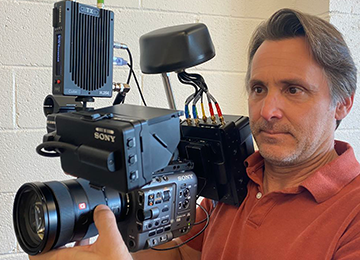 We chose the Sony FX-6 to capture our content, not only because it is high quality with great dynamic range and sensitively, but also because it is compact.  Although it is small and nimble, it shares the same menu and recording structure as its big brother, the Sony Venice camera.  So even though these systems may have been first developed just to send proxies, the HD we sent to the cloud was plenty good quality for our purposes.  We did record 4K UHD on the camera, but only as a backup, and we never found it necessary to use.

Believe me, I was more than a little nervous having to depend on a solid internet connection while walking around NAB.  I was even more worried when it was suggested I use a cellular connection.  However, I have to say it all came off without a hitch.  I should explain a couple of key points that made this possible: 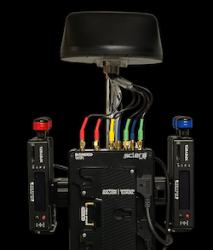 First, we had the benefit of using a Sclera Digital cellular modem.  Through a methodology that uses a combination of hardware modems and VPN software, it performs a bonding process through their cloud servers.  This merges multiple cellular signals and bonds them together to form one strong, reliable connection.  It is like having a diversity wireless transmitter that is constantly searching for and using the best available frequency, even combining them when necessary. 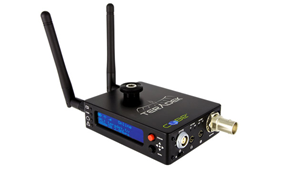 Secondly, it is important to point out that we were not live streaming, but uploading a recording that had been stored on the Teradek Cube.  If there was an interruption in the signal, it would simply pause the upload and restart as it was able with no dropped frames.  I can attest that it really worked well, and although we were using HD, the latest Teradek boxes are now capable of 4K HDR.

Our experience was so positive at NAB 2022 that we have decided to employ Camera-2-Cloud for our coverage of Cine Gear Expo.  Keep an eye out for us at the Expo and if you can’t make it to the show, check out our streaming coverage on the web at DigitalCinemaSociety.org