(Excerpted from the Digital Cinema Society eNewsletter, May 2016)

In the weeks after NAB, it is customary for trade Journalists to offer a review of the gear they uncovered at the show. But having shot 62 separate streaming interviews from the show floor it’s hard to imagine any way to offer more compressive coverage. So, if you want to see what was new at NAB, check out our videos; they can all be found streaming from our website. 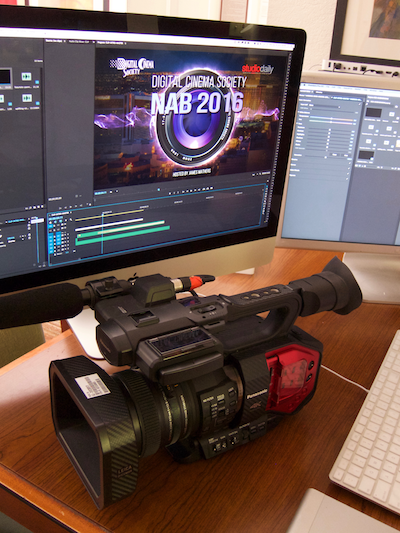 Instead, I’m going to write this month about the process of our NAB coverage and how we captured our interviews for the first time this year in 4K. There has been a lot of discussion over the last couple of years about the need to acquire in higher resolutions, and it seemed fitting that we should not just talk about shooting 4K, but also put it to a practical test with our NAB coverage.

We’ve been covering NAB with on-camera interviews for over a dozen years now. When we first started this effort, besides us, there were only a few local TV crews who were even covering the convention. Nowadays you can’t take a step in any direction without bumping into another crew shooting news coverage for any variety of streaming outlets.

Our early years were captured in Standard Def, first BetaCam, then DV, graduating to HDV tape in 2006 and eventually going tapeless HD for the first time in 2010. We used to finish for the web in a very small, low bandwidth Quicktime player window of only 320×240 pixels. Broadband connections were slow back then and we wanted to make sure the content was accessible to a large segment of the community all over the world. We began to finish in HD resolution only a few years back, first in 720 and now at full 1920×1080.

Nowadays, viewers are often going full screen, even to their internet connected large screen TVs raising the bar substantially for necessary streaming picture quality. Luckily, internet speeds have improved globally and modern media players can now sense the bandwidth of the device receiving the signal, so the results are good as long as the master is up to par. We’re not yet streaming in 4K, although judging from our timeline up until now, it may not be too far off in the future. But I have to wonder, does anybody really need to see my face in 4K?

At any rate, future proofing our content was one factor in our decision to start capturing in 4K. However, even delivering an HD down-res, you can see a marked improvement in the streaming picture quality. While I would like to think that our experience is paying off, and that we get a little better at this every year, I’m not sure what else could explain all the positive comments our coverage garnered this year. I’m proud to share with you feedback from a couple of people whose opinions I highly regard:

Michael Cioni commented: “I’m so impressed with all the content you gather, the people you cover, the depth and effort of your desire to help others. It makes you such a wonderful resource…Keep up the amazing work:-)

Meanwhile, Nancy Schreiber, ASC wrote: “I was not able to attend NAB this year, as I was in NYC. But your visits to so many vendors, with such thorough reporting on new gear, made me feel just like I was in Vegas ( except I missed the parties!) Thanks so much…Well done!!!

Besides the upgrade to 4K, we really didn’t do anything else much differently than we have done in the past. Of course, we had a great team this year including Producer David Mahlmann, Cinematographer Cameron Cannon, and Editor Christopher Knell. And with many years as an AD under her belt, our DCS Executive Director Charlene Mathers probably has the toughest job, namely scheduling. 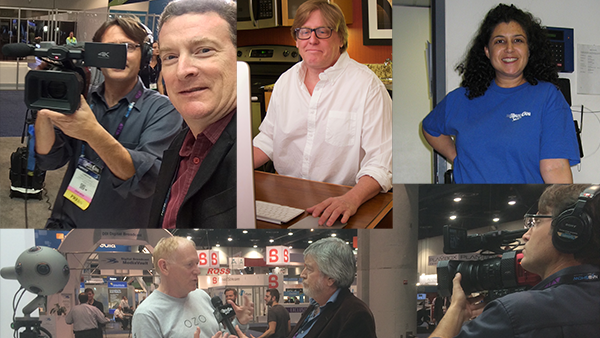 Although no one specifically mentioned the look, or technology, I have to think that capturing in 4K may have had something to do with our especially warm reviews this year. And the fact is that with proper planning and gear, the upgrade to shooting in 4K was really quite easy.

With so many interviews tightly scheduled over three and a half days, and having to traverse the vast area of the Las Vegas Convention Center, we needed to travel light and move fairly quickly. We also needed a camera that could create a decent image with minimal lighting. After conferring with our team, we decided to test Panasonic’s new DVX200. If you’re not familiar with it, it has the same basic form factor as their DVX100, a pioneering standard def DV camera released back in 2002 that helped propel the whole DV revolution. The bright red color of the body helps to visually distinguish the new model on the outside, and the Large Single 4/3 MOS Sensor with a claimed 12 Stops of dynamic range distinguishes the camera on the inside. 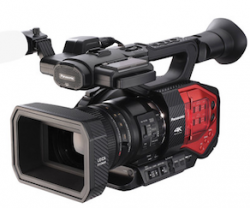 I mention the relative cost of the cards, because it is helpful to have several in play in order to bicycle them back and forth from the convention floor to Chris, our Editor, who is stationed at a hotel across the street from the Convention Center; (more about that set up later.) Decent quality 32GB SD cards, which can hold about 40 minutes of 24P UHD cost less than $20 a piece, so we were able to afford a half dozen even on our meager DCS budget. 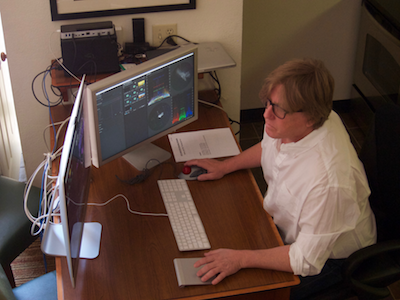 Of course workflow is a major consideration these days when picking a camera, and the DVX-200’s abilities in that area also helped make it the correct choice. However the camera was only the first of several pieces of the pipeline that needed to be upgraded for 4K. According to our Editor Christopher Knell, “There was no way I could have ever edited over sixty videos in such a short timeframe without being able to natively edit in 4K, which required a topdown upgrade of our system.”

Replacing our primary editing computer, an iMac5K which was still fairly new, was not in the budget, so we turned to our friends at OWC for help. We ordered a memory upgrade kit online from MacSales.com, custom designed for that particular iMac, and loaded it to the hilt with as much RAM as would fit. We went from a measly 8GB, (which adequately handled our older and smaller files’ sizes,) all the way to a screaming 4K ready 64GB. 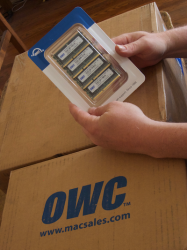 I also need to comment on how easy this added memory was to install. The upgrade chips arrived within a few days and were seamlessly installed in less than a half an hour. Chris is pretty savvy at these things, but I feel that even I could have handled it, especially with the clear step-by-step instructions on the website. And if that is still intimidating, you can also send your computer in to OWC and for a very nominal fee, they will preform the install and quickly return your upgraded computer to you.

A workflow is only as good as its weakest link, and only as fast is its slowest component, so there were a couple of other areas that also needed attention; one was storage. Of course 4K requires more storage, and we were also not about to mount the kind of effort necessary to cover NAB without adequately backing up the media. We again turned to OWC and MacSales, this time taking advantage of their ThunderBay 4 RAID solution.

As the name would imply, the ThunderBay comes equipped with ThunderBolt connectivity, which is a heck of a lot faster than the Firewire 800 or even the USB3 connections of past years. It has four drive bays which can now accept bare drives up to a capacity of 8TB each for a whopping total of 32TB in a unit only about half the size of a shoebox. 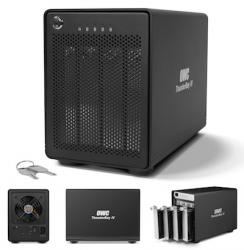 The ThunderBay is easily user configurable in RAID 0, 1, 4, 5 & 1+0 via their SoftRAID, a software suite which also provides intelligent drive monitoring with desktop & email notification in case there is ever a drive that acts up. (I’ll have to take their word for it, because this is my second ThunderBay and we have yet to experience any issues in heavy use for well over a year now.) 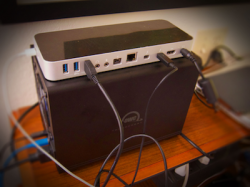 Another OWC product helped streamline the connectivity, namely the Thunderbolt 2 Dock. It has 12 ports with a variety of in and outputs including Dual Thunderbolt 2 for fast daisy-chain support, 5 USB3 ports, (2 with high-power,) Ultra-HD 4K and multiple display ports, even Firewire 800 for legacy devices.

In short, using Adobe Premiere Pro and having a fast enough computer allowed us to natively edit 4K without the need to first render proxy files. Without this combination and the camera’s ability to record conveniently in ProRes, we never could have maintained our Post schedule. Overall, our upgrade to 4K was relatively painless and quite economical. The camera package can be purchased for only about $4,000, and by upgrading the iMac’s RAM instead of chucking it for a new model, the Post investment was also modest.

I think we got a lot of bang for the buck, and the improvement in picture quality is evident on-screen. I’m happy to report we stepped up and met the challenge of 4K. If we had it all to do over again, I wouldn’t change a thing, but with the way things change, I’m sure we’ll not be resting on this plateau for very long and will have to figure out the next major upgrade in the not too distant future. 8K anyone??? I’m in no hurry.