Covering Standup With 5 Cameras, a Limited Budget, and a Little Help From My Friends 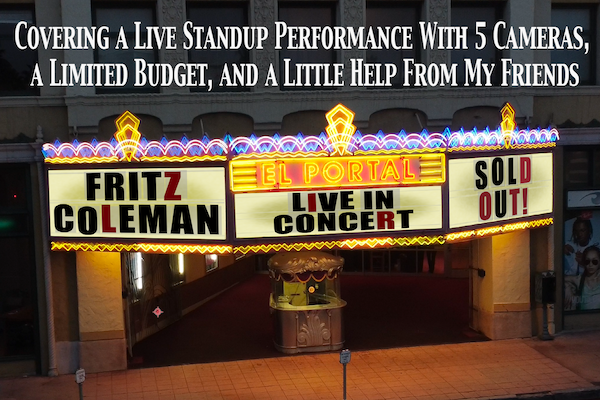 Covering Standup With 5 Cameras, a Limited Budget, and a Little Help From My Friends

As regular readers of my monthly “One DPs Perspective” column know, I like to write about the projects I work on in my day job as a Cinematographer, from Indie Features, to TV Pilots, to new tech evaluations, the more challenging the better.  However, one thing I have not done too much of in my long career as a DP is shooting standup comedy specials. I got the chance recently when our DCS Editor Christopher Knell wanted to help his friend Fritz Coleman figure out how to create a self-financed standup comedy special. 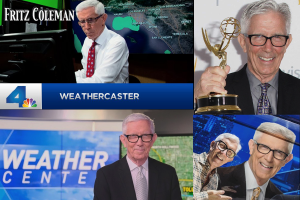 For those who have spent much time in Southern California over the last four decades, Fritz Coleman needs no introduction.  He was the longtime and much loved weathercaster at the local NBC affiliate before stepping away, by coincidence, near the start of the pandemic.  Despite numerous charitable activities and taking up podcasting as co-host of the popular “MEDIA PATH PODCAST,” Fritz was getting bored in retirement.  He decided to relaunch his career as a standup comedian and thought having a performance recorded in front of a live audience might help. 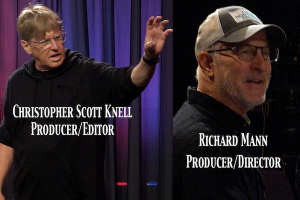 Tasked with putting such a project together on a shoe string budget, everyone needed to put on several hats.  Christopher Knell would not only serve as the Editor, but also as Producer.  He turned to another friend, Richard Mann, to co-produce and direct.  Besides having a long list of feature film credits as Producer, Richard also had extensive experience directing live music and comedy concerts.  I was tapped to serve as DP, as well as Line Producer, to help pull all the needed elements together.  Despite the budget limitations, we wanted this to be the kind of project we could all be very proud of, and one that would serve Fritz Coleman’s ambitions.  A cheesy, amateur looking documentation of his performance would simply not suffice; this production needed to look like a million bucks.

I can truly say after I got to know him, that he is one of the nicest guys in the media and entertainment business, which helped to make this entire production a joy to work on and a labor of love.  Pulling the crew together on a shoe string budget was greatly aided by Fritz’s popularity.  Canvassing for crew, I would get replies like: “I love that guy…count me in.”

My Cinematographer friends, Cameron Cannon and Jon Tucker, joined me in operating cameras and setting up lighting, along with Eric Johnsen, who was brought in to assist, but ended up operating two remote cameras; (more on that to follow.)  My nephew, Noah Mathers, a longtime Production Sound Mixer, who has recently moved into the field of Computer Science, returned to handle sound recording duties, and DCS Executive Director, Charlene Mathers, returned to her AD roots to handle production, aided by PA, Michail Melnik.  The location provided Board Operators, Edwin Pleitez on Lighting and Beau Bancroft on Sound, to round out the crew.

The historic El Portal Theatre in North Hollywood, California was chosen as the venue.  It first opened in 1926 serving Vaudeville, then Silent Movies, and remained one of the premiere movie palaces through the years until it was critically damaged in the Northridge earthquake of 1994.  Painstakingly rebuilt and opened again as a stage venue in January of 2000, it continues to serve the community for a wide variety of legitimate theatre productions and live events, as well as being a popular movie and TV shooting location.  We chose the more intimate Monroe room, a bit smaller than the 360 seat main stage. 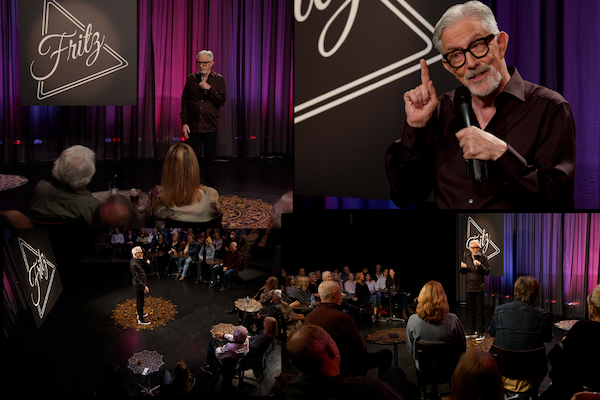 With the crew and location secured, I set out to put together an equipment package that would give us the most production value given the limited budget. I started with cameras that I own including a Varicam V35 and Varicam LT, as well as a LUMIX S5. The Varicams share the same S35 sensor, and the LUMIX is a full frame mirrorless model; however they are all Panasonic brand cameras capable of recording in the same 4K Vlog codec, which makes them fairly easy to match, and a combination I have used on many a production. Although these three cameras would adequately cover the performance, (one wide, one closeup, and the other roaming for audience reactions,) I really wanted to give our Editor/Producer more options.

I reached out to my friend Neil Matsumoto, who works with the LUMIX division of Panasonic, to see if he might be able to help.  He had been telling me about their new “box” cameras, such as the flagship Full-Frame S1H and the Micro Four Thirds GH5S. Like my other cameras, they are also Netflix approved, offer Dual Native ISO and impressive dynamic range, (over 14 stops for the full frame BS1H and 13 stops for the Micro Four Thirds BGH1.)  The S1H also uses the same L-mount lenses as my mirrorless LUMIX S5, so I was able to mix and match my collection of Sigma and LUMIX full frame lenses, which all have valuable electronic lens data and focus assist features.  I wasn’t originally planning or staffed for five cameras, but when he offered them on a demo basis, I couldn’t resist.  It would also be an opportunity for me to get familiar with this type of camera that has been rapidly growing in popularity.

With a box-style camera you do give up the option of a viewfinder or built-in LED, but they offer instead robust i/o including SDI (3G), TC, Genlock, HDMI, USB-C and a very handy Ethernet port. We actually used Ethernet to both power and control both cameras with a single Macbook Pro using LUMIX Tether software and a small PoE+ (Power Over Ethernet,) networking interface. LUMIX Tether is a free desktop application for Mac or PC that allows you to control up to 12 cameras, as well as giving you a live view function of all cameras simultaneously or individually. We set and controlled recording formats, aperture, white balance, ISO, shutter angle, recording start/stop, and even focus without having to physically touch the cameras or change the batteries. 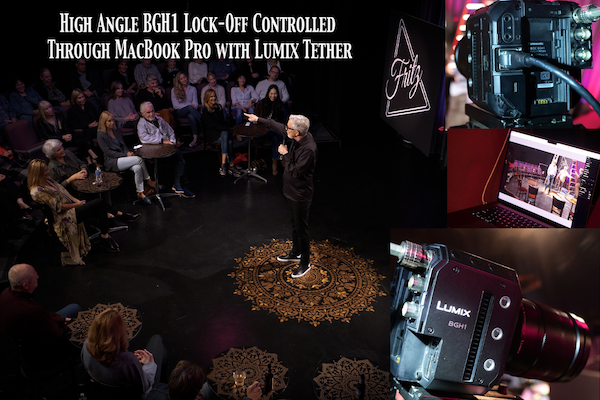 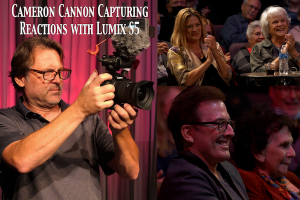 The location offered a nice “crow’s nest” perch, perfect for mounting a locked-off high-angle overview of the room, but it would have been extremely difficult, and tied up personnel, in order to have it operated. This way our one Camera Assistant, Eric, who happened to be very computer savvy, was promoted on the spot to remotely operate the two box cameras. I had Cameron Cannon on the floating camera, jumping to a variety of angles throughout the performance to get different audience reactions. I considered also having him spend part of the performance on a slider to add a little motion, but it would have proved very disruptive to be going on and off a slider during a live performance, and would have meant giving up many seats for a show that was already sold out. 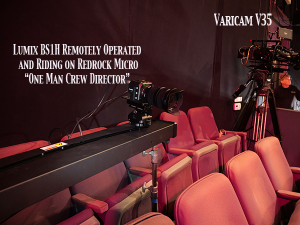 I was skeptical when he first mentioned it, but our Producer/Editor Christopher Knell offered that he owned what is known as a “One Man Crew Director, “ which is designed for automatic unattended movement during documentary interviews. Its curved track allows the camera to travel at a constant speed and equal distance from the subject. As a B-camera in an interview situation, this means that the subject will always remain at the same focus and centered in frame. We set it much further back, moving behind the heads of our audience. We were lucky in that the seating aisles in the venue were curved and the shot was relatively wide, so framing was not an issue even as Fritz moved around the stage. It turned out to be a simple, but elegant solution to create fluid movement, which really added to the production value and only sacrificed a minimum of valuable audience seating. 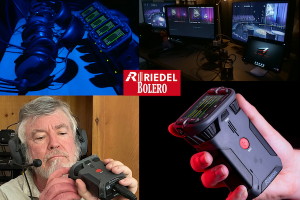 Another technology I’ve been eager to test is Riedel’s Bolero wireless intercom system, although we only used the most basic of its many powerful features. For example, a Bolero system can support up to 250 belt packs, while we only needed a 5 comm set.  Each belt pack has six discrete channels, which is great for large crews so separate departments can have their own channels. When transmitting you can choose which channels to address, from single channel, any combination of, or all six at once.  Besides serving as a camera intercom, Bolero can also function as a walkie-talkie and it even supports Bluetooth to interface with your phone or allow communication with remote collaborators via the web. I’m not sure how they do it, but the clarity of the voice communication is like nothing I have experienced before, and the internal batteries will run for a couple of days without requiring a recharge.  Best of all, it is really easy to set up; (even a DP can do it.)  The system served our needs perfectly, but I’m looking forward to using it on a bigger show where I can really take advantage of all the great features.

The show is now in post, it has great production value, and it is….FUNNY!  Fritz and our team are proud of the show and are very appreciative of the crew and companies that came together to make it happen.  I don’t think shooting live action multi-camera productions will ever be my mainstay, but it is nice to have the capability in my bag of tricks and it was fun to explore new forms of content creation.