The newly named CTA™ (Consumer Technology Association, formerly the Consumer Electronics Association) holds their annual spectacle, still known as CES, (Consumer Electronics Show) every year in Las Vegas during the second week of January.  It dwarfs NAB with over 20,000 new product announcements, 2.4 million square feet of exhibit space, which is equal to 50 football fields.  It consumes the current Las Vegas Convention Center, as well as the Sands Expo and Convention Center.   There are over 150,000 attendees, including 45,000 international visitors from 150 countries.

Wearables, thermostats, even automobiles; everything that can be connected will be connected.  These all took up considerable real estate, but are not too directly tied to our interests as content creators.  However, there are always lots of interesting Entertainment Technology developments we need to track, and that was especially true at this year’s CES.  The adoption of technologies such as VR, HDR, 4K, 8K, and Drones will play an ever-increasing role in our daily lives, if not our careers. 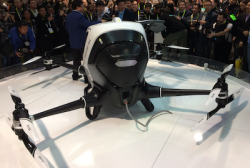 So lets start instead with Drones; they were everywhere, in a wide variety of configurations and sizes, some no bigger than a small bird, while at the other end of the spectrum the Chang 185 Autonomous Aerial Vehicle, (what I refer to as the “Drone Taxi”,) is large enough to transport a full grown person.  It has a 30-mile range, but with FAA restrictions and the rule of common sense, I don’t think you’ll be seeing them giving rides around here anytime soon.  However, the manufacturer points out that it can be used for such applications as search and rescue, sending it out unmanned to return with a lost or injured person inside; think drone ambulance, EMT pod, or rescue drone.

Of course the aforementioned mini-drone would pair well with what the manufacturer claims is the world’s smallest 4K camera, the “Mokacam.”  Out of Hong Kong and started from an IndieGoGo campaign, the fully self contained 45mm x 45mm cube has a 16 megapixel sensor capable of shooting 4K, (3840×2160.)  An EVF/menu screen is easily attachable and basically doubles the size, but this is an optional configuration.  It currently manages only 15fps in 4K, but up to 60fps in 1080p and 120fps in 720p.

It can be set to record to a 64gb SD card in H.264 with motion activation.  It has WiFi capability and can stream live using either an included iOS or Android application.  The casing features a magnetic mount, the lens is glass, and it is waterproof to a depth of almost 200 ft.  It will retail for $169 with delivery expected to start next month.

The Return of Super8 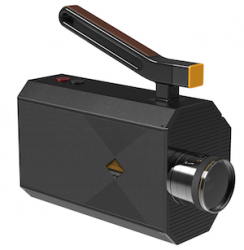 From the retro department, Kodak has returned to the Super 8 film format first launched over 50 years ago. The original Super 8 camera debuted at the 1964 New York World’s Fair and went on sale the following year. However, they stopped producing Super 8 units in 1982, after video cameras decimated the market for home movies made with film.  Now the company has introduced at CES a new camera that tries to take advantage of the conveniences of digital technology with the aesthetic and archival value of shooting on film. 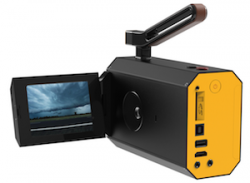 Just as movies shot on film are usually converted to digital files for editing and projection, buyers of the new camera that turn to Kodak for processing will get a digital copy of their imagery as well as eight-millimeter film to use in projectors. The new camera will feature a digital viewfinder, microphone, interchangeable C-mount lens, with crystal sync speeds of 9, 12, 18, 24, and 25fps.  The first new Super 8 is expected to arrive in a limited-edition version in the fall of 2016 at a cost between $400 to $750, with a lower-cost version aimed at a broader audience in 2017.  Processing the film should cost $50 to $75 a cartridge.

I’ve recently written extensively on how I feel that VR is at a real turning point. In the not too distant future we will see prices drop, utility improve, and content start to become more available.  It should come as no surprise that VR (virtual reality) was a major theme at CES this year.  It is still very early days for this nascent technology, but the excitement was palpable. 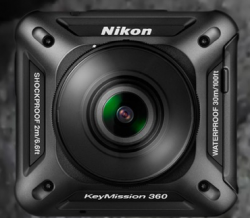 There were many 360 degree camera rigs and production services.  Nikon notably introduced their first action camera, the KeyMission 360, which shoots 360-degree video in 4K. Only slightly larger than the market leader GoPro Hero, the new Nikon features lenses on front and back, is shockproof to 6.6 feet, waterproof to 100 feet, and touts electronic vibration reduction.  (Another big Nikon announcement was the new D5, their flagship 4K DSLR available in March for $6,500 with a 153-point autofocus system and maximum ISO of 3,280,000!)

Lines for a chance to strap on a headset and sample the latest from Oculus Rift seemed like they were blocks long.  And once demo participants got their turn, they didn’t want to relinquish the headsets and had to be shooed along by the booth reps to make room for the next patron.  It was sort of a mess, and I have to admit that I didn’t get a chance to experience every sample, but from judging from Oculus, the technology is making great strides and is on track for a bright future. 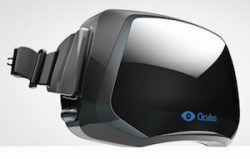 The combination of great visual experience together with spatial audio, touch controllers and a good lineup of content make it stand out.  At the announced price of $599 shipping this March, plus the $900 gaming PC you’ll need to power it, it can get pretty expensive for the consumer.  However, it is going to take this kind of premium offering to sell the idea of VR to the masses, and as I said, prices are sure to be coming down.

AR was also on display with upcoming Sony product called SmartEyeGlass.  In order to solve the “chicken and the egg,” where hardware adoption is dependent on abundant and useful apps, Sony was at CES canvassing for developers.  It is basically a head-mounted display, with camera, sensors and a controller featuring a touch sensor.  The SmartEyeglass will show text and graphics overlaid on the user’s view of their actual surroundings. Samples included maps and realtime overlay of step by step visual instructions that might be viewed while the user is looking at the project at hand.  Unlike Google Glass, SmartEyeglass overlays images to both eyes but it will need connection to a PC or an Android smartphone via wire or Bluetooth. 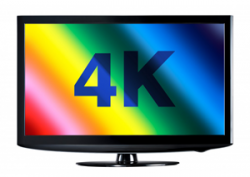 Although several 8K TVs were on display, they were more about proof of concept rather than practical product.  Sales hype to the contrary, I think most in the electronic industry believe that the full adoption of 4K is still a ways off. Thus, setting 4K as a plateau, rather than any higher resolution, is a much more realistic ambition for the foreseeable future.  It was interesting to note that an 8K demo was never within sight of a 4K display.  The reason, I believe, is that no one would be able to readily tell the difference; it is that subtle.

HDR, on the other hand, is another technology which was prominently demoed that does have the power to really make a picture pop.  Not just more vivid colors, but also more detail in the brightest and darkest parts of a scene which otherwise would be lost.  My opinion is that HDR is a much more significant means of display enhancement than pushing for higher and higher resolutions.  Of course, these two technologies are not mutually exclusive; UHD and HDR can be combined, so why not have both?

Panasonic showed the next generation Ultra HD Blu-ray Disc Player and displays supporting the latest technologies of 4K and High Dynamic Range.  HDR-capable TVs, (capable of reading and displaying HDR metadata on top of the regular signal) were also being shown by suppliers including Sony, Samsung, LG, Phillips and VIZIO. 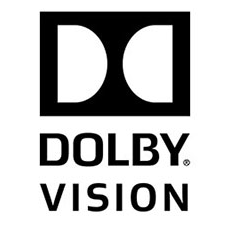 Like other new entertainment technologies, a holdup to implementation is a dearth of content.  Dolby is trying to remedy this situation by helping content creators develop HDR titles through its Dolby Vision product that can master both original and existing content.  Sony Pictures Home Entertainment (SPHE) has joined Warner Bros. as the major studios to announce Dolby Vision video mastering for select titles in their libraries. Meanwhile, new titles originally mastered in theaters for HDR include Fox’s The Martian, Disney’s Tomorrowland, Pixar’s Inside Out and Warner Brothers’ San Andreas.

Several streaming services currently have the capacity to add the HDR metadata to their transmissions. Amazon is streaming HDR content now and Netflix will start soon.  Camera manufacturers are also busy working on building HDR encoding into their systems for live broadcasting of HDR.

The Only Constant is Continued Change

The Consumer Electronics Industry is in a race to the future, and significant challenges lay ahead for content creators trying to keep up with the accelerated pace of entertainment technology.  If we’re going to stay in this business, we had better get used to it, because with the exception of vending machines, you can always count on change.  In fact, today is probably the slowest rate of technological change we will ever experience in our lives.  All we can do is hold on and enjoy the ride; even if it does get a little bumpy it promises to be a rewarding trip.