Can Super Heroes Save The Cinema…Or Will They Kill It?

It’s the three day Memorial Day weekend, a prime moviegoing opportunity, but checking out the offerings at the local cineplex leaves me less than enthusiastic about making the major investment of time and money it will take to go out and see a movie. Enjoying a big screen theatrical experience with my family has traditionally been one of my favorite things to do, but increasingly, there are fewer movies worth the effort.

The current choices at my favorite local cineplex are Guardians of the Galaxy II, Pirates of the Caribbean: Dead Men Tell No Tales, Alien Covenant, Baywatch, Beauty And The Beast, and The Fate of the Furious. Although summer doesn’t officially start until the third week in June, Memorial Day has always been the traditional kickoff of the season, a season of superheroes, sequels, and franchise tentpoles. I’ll probably have to wait until two weeks before Christmas before I get a movie with some semblance of originality as they’re released for Oscar consideration.

Of the aforementioned, current offerings, the Pirates movies sounds the most appealing, but if I’m going to make the effort, I would like to have a premium experience; I’m just not sure I can afford it. After spending just shy of $30 per ticket to see it in IMAX, plus parking, and the obligatory overpriced snacks, it will cost me about $200 to take the four of us to see the movie, not including going out to dinner, which is usually part of such an outing. I hate to think of myself as cheap, but laying out that kind of cash for a movie I’m not really excited to see, just doesn’t seem to make sense. I have to wonder, am I alone?

I’m a Baby-Boomer, part of the largest age based demographic on the planet. If we stop going to the movies, how can cinema thrive? It is a pretty big group to ignore, and ticket sales have been on the decline. However, the metric Hollywood likes to brag about: “box office,” has still been increasing on a year over year basis as ticket prices have risen. 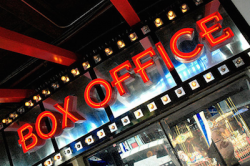 Domestic box office broke a record for the second consecutive year with $11.4 billion in 2016, and it’s poised to do so again with current ticket sales through the first quarter of 2017 at $2.8 billion, up 6% over the same period a year ago. As for the latest “Pirates” sequel, it’s “sailing to a $75 million opening weekend” according to Variety. Even with a $230 million budget, it looks to be a winner, and will probably join some of it’s predecessors in the list of top Box Office earners; (for example, the Pirates Dead Man’s Chest sequel was the highest grossing picture of 2006). But how did we get to this intersection of financial success and lack of originality?

There’s a four letter curse word in Hollywood that is considered far more egregious than any starting with “F” or “S”…it is Risk. Studios are as averse to risk as just about any industry you can think of. And despite the over $200 million budgets, these large scale productions, with only occasional misses, are the kind of movies that can still reliably get butts into theater seats. They are still profitable for the studios, so don’t expect a change any time soon.

In describing the motion picture development process for his book, Adventures in the Screen Trade, Oscar winning Screenwriter William Goldman wrote, “nobody knows anything.” While the conclusion may still hold, this book was written in 1983, before applying the insights of Data Science to the equation. Studios are always looking for tried and true,“bankable” elements, which can now be finely quantified. They can turn, for example, to the Numbers Bankability Index which estimates how much an individual is worth to a film based on analysis of the Hollywood Creative Graph™. Analytical algorithms allow the Bankability Index to measure the influence of each person involved in a project, which is then translated into an estimate of the average value added per movie by the top 50 biggest players in the industry today.

This chart is based on the worldwide box office earnings for every film a person has worked on, adjusted to reflect their performance over roughly the past decade. It is therefore a reflection of the most consistent performers over time.

Lets look at the top ten, which may offer a couple of surprises. This may change after the upcoming “Mummy” sequel is released, but Tom Cruise is #1, followed by Will Smith, Denzel Washington, and Clint Eastwood. It doesn’t have to be Actors, just those individuals associated with money making movies, which elevates John Williams to #5 and the only woman in the top ten, producer Kathleen Kennedy to #6. She is followed by an extremely successful screenwriter you may have never heard of, Andrew Stanton, responsible for writing some of the top animated movies of all time including Finding Dory, Inside Out, and Toy Story 3. Rounding out the top ten are Vin Diesel, Jerry Bruckheimer, and producer David Neyman, who may not be a household name, but has produced, among others, several of the Harry Potter movies.

FYI, Steven Spielberg is #11 and James Cameron is #12, while Adam Sandler, at #15, is perched above Tom Hanks at #16. After a couple of less successful big screen outings, such as The Lone Ranger, Johnny Depp is at #34, but look for him to move up the chart after the numbers come in from the latest Pirates sequel.

It is interesting to note that there are no Actresses listed in the top ten, which may explain why there are so few females headlining this summer’s tentpole movies. An interesting exception is next weekend’s release of Wonder Woman, (who wants to try to imagine Tom Cruise or Will Smith in the Wonder Woman costume)? Although it’s another comic book adaption, which I’m getting pretty tired of, I do give Warner Brothers credit for finally making a female superhero movie, which is also directed by a woman, Patty Jenkins. FYI, no women have thus far breached the 50 member Bankability Index for their work as Directors.

It is really no mystery then why we see so much of the same material. When the studios can make a reliable profit with business as usual, what motivation do they have to take a chance on something new? With massive franchises that can produce sequel after sequel and create ancillary products like toys and theme park attractions, while appealing to a broad international market, they aren’t about to take chances. The Studios function as businesses, answerable to their investors, rather than patrons of the arts. Or, as the old saying reminds us, “There’s a reason they call it Show Business”.

In the meantime, other outlets have upped their game to fill in the void left by the dearth of originality in the theatrical market. Considerably high quality content is now being delivered by companies like HBO, Showtime, Amazon, and in particular, Netflix.

It seems we have the old Blockbuster chain to thank for inspiring the transformative Netflix effort. Things were set into motion when they charged Netflix Founder Reed Hastings a $40 late rental return fee for Apollo 13 back in 1998. In his frustration, he created an alternative DVD mail order distribution channel. Years later, the result is that we can now stream original, and recently released, theatrical titles directly into our homes. Netflix only started producing in-house content in 2012, and now boasts a string of hits including House of Cards, Daredevil and Orange is the New Black, becoming a studio unto themselves.

Along with Amazon, who produced the critically acclaimed Manchester By The Sea, Netflix is also beginning to penetrate the theatrical market. However, they don’t see why they should respect the time honored “Theatrical Window,” and are pushing to shrink or eliminate the duration between a theatrical opening and a movie’s release to the home. There is considerable pushback from the traditional gatekeepers, fearful that shorter windows will hurt ticket sales. Exhibitors have threatened a theatrical boycott of projects released “day and date,” where movies would come out in theaters the same day that they are available to stream.

At the recently wrapped Cannes Film Festival, Netflix movies were booed in an apparent protest, and it was announced that starting next year, Netflix movies would no longer be considered in the theatrical competition. How can these not be considered real movies with releases that include, among others, Martin Scorsese’s long awaited feature The Irishman or War Machine starring Brad Pitt? Stigmas have dissolved and top notch talent such as Robert De Niro and Michelle Pfeiffer, (who currently star together in HBO’s Wizard of Lies), are available to high quality projects whether they premiere in the home or cinema.

Meanwhile, consumer electronics technology keeps improving to elevate the home viewing environment, closing the gap between the home and theater experience. I take advantage of a small projector and enjoy an 80” screen, which is as big as I can fit in my modest living room. While I love going out to the movies, sitting in a darkened room with a group of likeminded strangers, taking in a well told story, the value proposition just doesn’t add up. When Netflix can be delivered to my home for a monthly subscription of less than $8, I find it hard to justify spending hundreds of dollars to take my family out to the movies.

It’s certainly not superheroes or sequels that will entice me to return to the cinema; in fact they are driving me away. I only hope the studios allow filmmakers to inject some originality into their films before all theatrical exhibition goes the way of the drive-in movie. Perhaps the fact that US domestic box office for this Memorial Day has fallen to its lowest level in 18 years will start to get their attention. In the meantime, I’ll be binge watching House of Cards and viewing first run movies at home while sadly missing the ritual of going out to the movies.

If you would like to peruse The-Numbers.com Bankability Index: