Can James Cameron Save Theatrical Exhibition? 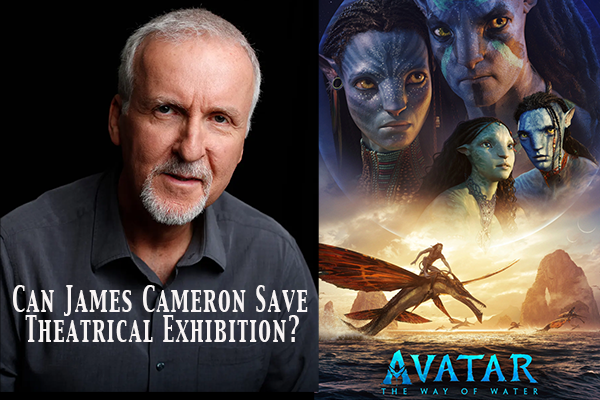 Can James Cameron Save Theatrical Exhibition?

The reviews are in and it is no surprise that James Cameron’s long gestation in creating an Avatar sequel was worth the wait; it is a monumental achievement in motion picture technology that will set a new benchmark in visual storytelling.  I’m not going to give you my personal review, but just to say Avatar: The Way of Water is a damn good movie! Since the original Avatar, TV and streaming quality and production values have been rapidly improving, while theatrical motion picture content quality and techniques have for the most part remained relatively stagnant.

A global pandemic, vastly improved home viewing environments, and entertainment price inflation, have deprived audiences of a good excuse to go out to the movies.  Well, James Cameron working in High Dynamic Range at 48 frames per second, and the immersive experience of enhanced 3D may have just given the prescription the exhibition industry needs right now to get butts back in theater seats. Although it may not be an answer to all their problems, this movie will definitely be a shot in the arm of theatrical exhibition.

Although it has been roughly 13 years since the release of the original Avatar in 2009, physical production on the sequel did not start until 2017. As the time neared to deliver the first of the sequels, Cameron was heard to say, “I’m supposed to have three scripts ready to shoot, and all I have are three writers I would like to shoot.”  So, much of the long delay seems to be related to tinkering with the story, but that did give some time for the technology to mature, and with Cameron’s penchant for pushing the boundaries of visual storytelling, we are seeing some amazing advances.

Cameron seems to follow John F. Kennedy’s ethos when he laid out the plan to put a man on the moon. To quote, “We choose to go to the moon in this decade and do the other things, not because they are easy, but because they are hard, because that goal will serve to organize and measure the best of our energies and skills, because that challenge is one that we are willing to accept….” 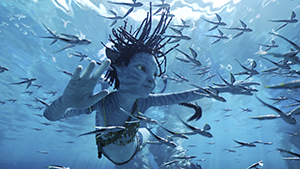 Take for example, the idea to shoot performance capture underwater. I know from my own experience that anytime you introduce water into a movie production scenario, you dramatically increase the complexity, but going under the water, you exponentially magnify those challenges. I’m sure most filmmakers would opt for depicting actors underwater by flying the talent on cables on a dry green/blue screen set, (ala Aquaman,) since they will be enveloped by CGI in any case. But that wouldn’t do for James Cameron, even though their faces were mostly just driving mo-cap simulations and their bodies were largely CGI.  He insisted on capturing his actors underwater, outfitted with special wet suits and facial capture camera rigs, while free diving in the water.  Free diving experts were brought in to train the cast in breath hold techniques to prepare them for an average 4 minutes of underwater performance without taking a breath. 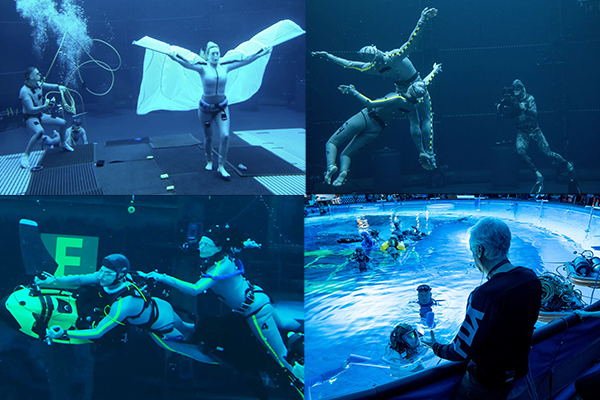 Another bold choice was shooting native 3D as opposed to post conversion.  It is a big enough challenge to shoot 3D above the water, but Cameron chose to also capture underwater performances this way. It takes a lot of clout for a director to take on these challenges, but we are talking about the filmmaker who delivered the highest grossing motion picture of all time, Titanic, as well as the third box office champion, Avatar.  This makes James Cameron a very hard person to say “NO” to, and we should all be glad that no one did.

Disney got the rights to Avatar when they paid $71 billion for 21st Century Fox just three years ago, and having grossed $2.9 billion, Avatar was certainly one of Fox’s crown jewels.  Even in a time of lingering Covid fears, The Way of Water brought in over $134 million+ domestically in its first weekend alone and is projected to reach $435 million worldwide.  There are at least two more sequels already in the pipeline with principal photography largely in the can.  This will certainly be a boon to Disney and to exhibitors, even though a running time in excess of three hours will mean that less screenings per day can be fit into the schedule.  (The running time is another example of James Cameron getting his way.)  However, Exhibitors will be pleased to again take advantage of their investment in 3D projection as they are able to charge premium prices with audiences happily paying for the enhanced experience. 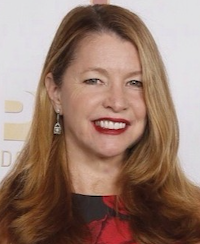 According to industry technology analyst Loren Nielsen, VP of Content & Strategy at Xperi Corp, “3/4 of the world’s 200K+ cinema screens are now 3D capable. In fact, 3D screens around the world have been updated, re-lamped and tuned in order to present what is probably the best 3D imagery any of us has ever experienced.” She stresses that “Avatar:TWOW was made to be experienced in 3D. The idea of immersing oneself, literally, into the watery world is an essential part of the experience and 3D does put you into the world more completely than 2D.” She also believes that “the HFR nature of the production is all in service of a better, more comfortable 3D experience. We can question whether 48 fps works in every scene, but the smart tech being used to match color, tone and to fine-tune motion blur and judder is noteworthy in its ability to redress some of the hyper-real appearance of more intimate scenes.” 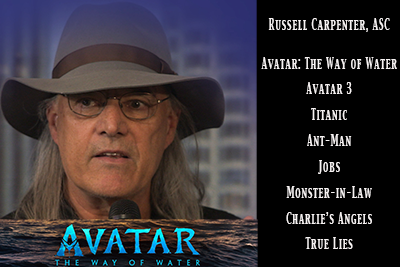 I would be remiss if I didn’t mention the work of Cinematographer, Russell Carpenter, ASC. Little did I know in the early 1980s, while working as Production Manager on Russell’s first feature film, that he would go on to become one of the most prominent DPs in the business, and he has done a great job here as well.  He won his first Oscar working with Cameron on Titanic, and I’m fairly confident that this new Avatar will win him his second statue. I don’t know that it counts for much in Academy Award consideration, but for those who don’t know Russell personally, I can tell you that he is one of the nicest people you’ll ever meet in this industry.

So, can James Cameron’s dogged determination and relentless attention to perfection save the theatrical experience?  Time will tell, but it certainly doesn’t hurt.  This is a movie that screams for the biggest screen you can find with all the enhancements, including 3D, surround sound, and with a 3 hour running time, a good seat.  See Avatar: The Way of Water at the highest quality theater you can find, and I think you’ll be glad you did.